On the map this looked like a do-able walk we had about 4 hours to do the walk (with treetop adventures at Brockholes planned for later that afternoon) and no walk the previous day. The weather was looking good and the pay meter in the Grasmere car park was broken, must have been my day!!. As it was this walk is a long one, from the ground it doesn’t seem that far, in fact you can easily reach Easedale Tarn in an hour. In theory all we were doing was adding a loop around the back of the tarn, to pick up another tarn and two Wainwrights. It should have been easy, but it takes longer walking in this area for sure. We only really stopped at the tarns due to time going far quicker than I anticipated, its a long walk everywhere in this part of the Lakes!! That all said this a cracking part of the world, the views back down to Grasmere are amazing and there were only a couple of spots were it got boggy (between Easedale Tarn and the start of the path to Blea Rigg and also after Codale Tarn). Other than that there are plenty of ups and downs, rocky knolls, streams and views that appear from nowhere. This walk also took me past halfway for the Wainwrights, Blea Rigg being number 107. 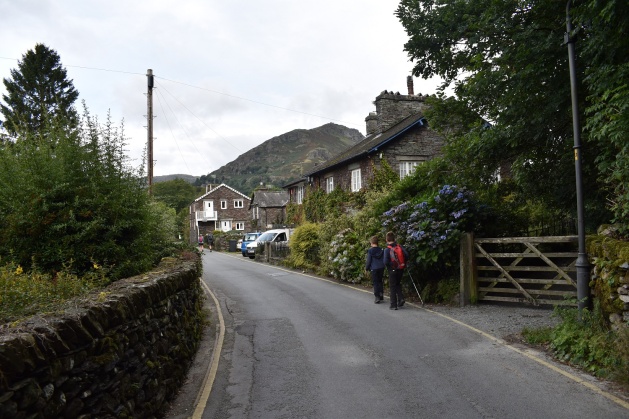 Leaving Grasmere village. My eldest is showing off his new rucksack and bladder pack, a fine purchase which kept him happy.

As you’re leaving the road you get this view of Easedale. Its a case of following the path to the distant waterfall and beyond

Helm Crag is on your right as you walk through Easedale 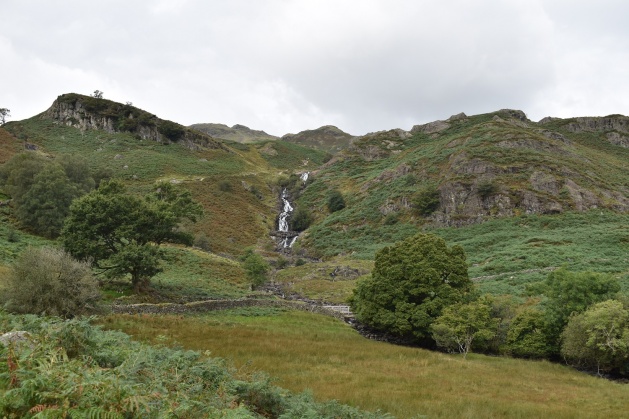 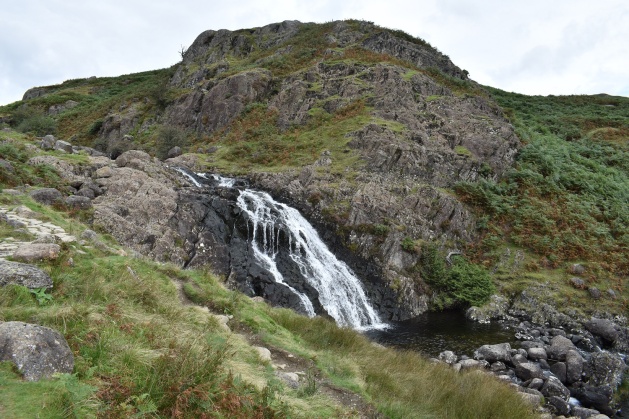 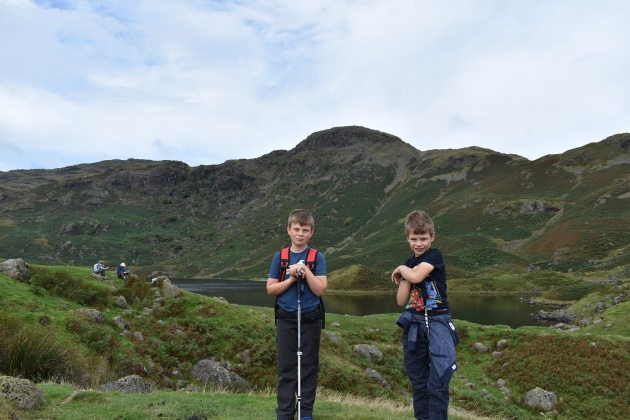 Easedale Tarn with Tarn Crag above the boys. We rested here for a few minutes before heading off to the left of this photo. Most people turn and head back here by crossing the outflow stream on the stones and walking to Stythwaite Steps

Its a shame people turn around because 15 minutes after that last photo, you get this view back over Easedale Tarn to the Helvellyn ridge 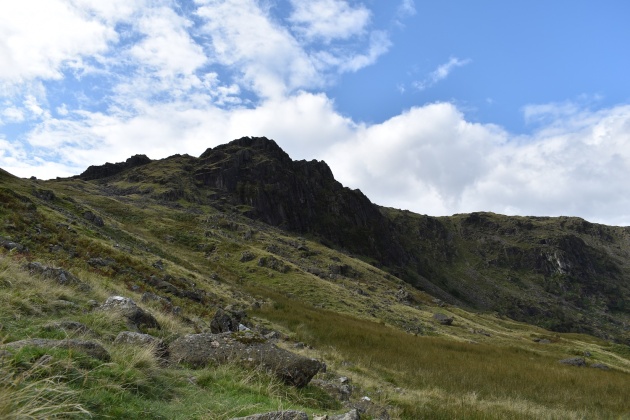 Blea Rigg, its a bit further than it looks from here 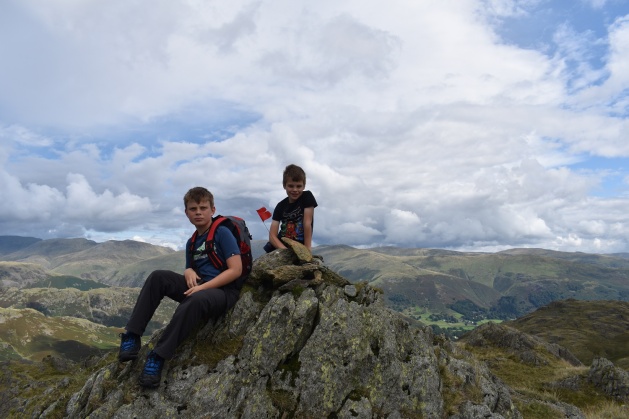 Not sure why there was a flag on top but this is the summit of Blea Rigg, plenty of fells in view from here including……. 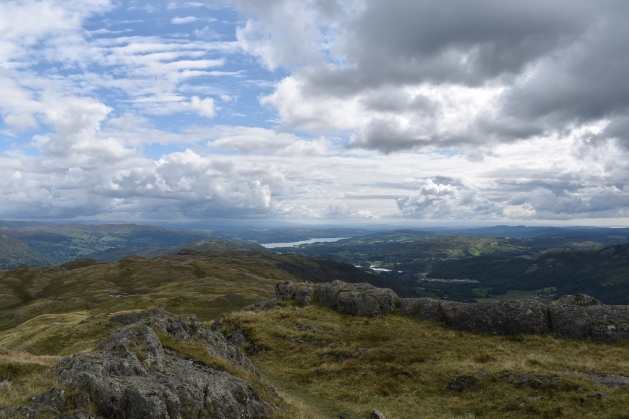 Silver How and Loughrigg Fell, with Windermere in the distance 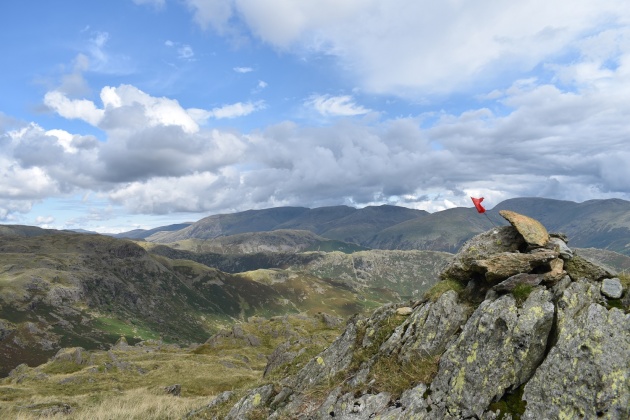 The Helvellyn Ridge is also still in view

And spinning around the Langdale Pikes remind you that you aren’t too far from there as well. Harrison Stickle is the high point

Finally the Coniston Fells stand proudly at the back, beyond the dark looking Lingmoor Fell in the middle ground

The path to Codale Tarn was good but we took a more direct route off path towards it. It was perfectly safe and saved us some time

We sat here at Codale Tarn for about 15 minutes to rest. Its a glorious place which would have wild camp written all over it and its far quieter than Easedale Tarn 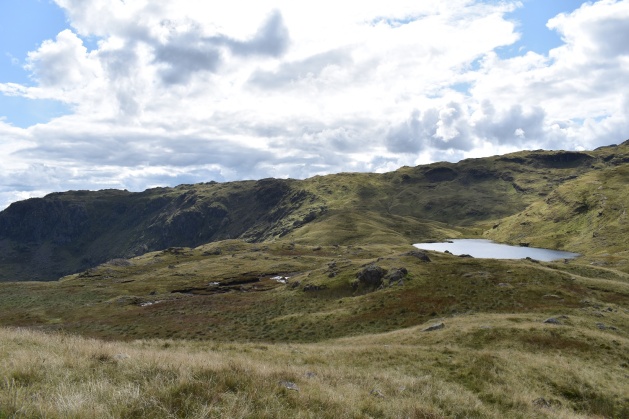 We are starting the climb to Tarn Crag now, looking back to Codale Tarn with a darkened Blea Rigg to the left. Our descent to Codale Tarn was down that ridge above the crags, centre photo

Tarn crag summit, lovely views to Grasmere but aware of the time we didn’t linger perhaps as long as we should. There is another top to the right of this which I visited as well which has better views of Easedale Tarn 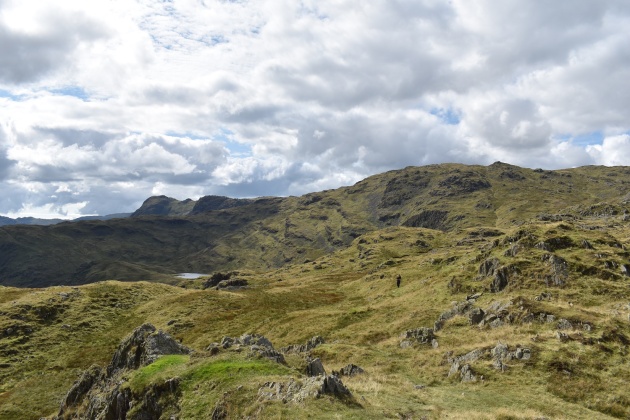 The Langdale Pikes stand out as I look back towards Codale Tarn. Sergeant Man is also up to the right 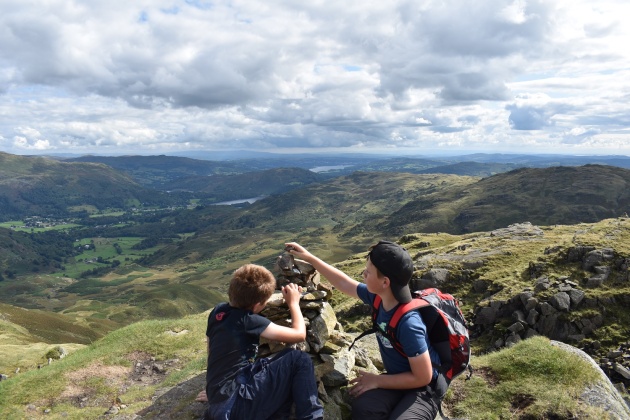 Stone balancing on the cairn. Its all downhill from here back to Grasmere

Not sure you would tire of this view of Easedale

Stythwaite Steps (although we used the bridge!!). The boys are getting a wriggle on to get back to Grasmere

A final pic from the lane back to Grasmere, Sour Milk Ghyll in the centre. Tarn Crag above

A couple of extra shots of the treetops adventure at Brockholes. Now this isn’t a plug or anything from me, but I loved it. And yes it is high!! The boys made it look easy!!!

This one gives a better perspective of the height. The red rope you can see is your life line in this case!! 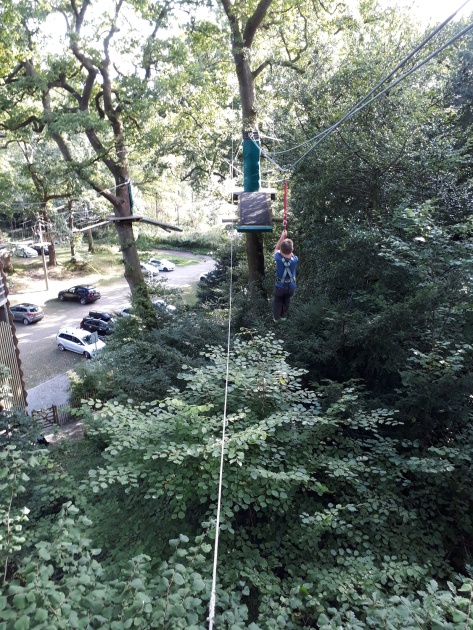 There’s also a few zipwires, followed by one huge 250metre one at the end. All in all a brilliant day