Don’t be fooled by the title, this isn’t the Welsh Snowdon. No this is the Dartmoor version, sat near to Ryders Hill on the southern moor. Its been over two years since I have been to Snowdon, that time I came from Ryders Hill and this time I chose to come from Avon Dam and over Huntingdon Warren. Now despite the lower altitude than the Welsh 3000 footer, this area needs respect, this area caught out an unprepared walker around a week ago, who called for help shortly after midnight after getting lost on Huntingdon Warren, suffering from hypothermia she was found around 3.15am. She was out without torches, maps, compasses or spare batteries for her phone or GPS. A lucky lady. It serves as a valuable reminder that these places deserve respect and thought. For me all was well, the sun shone, the walk was good and the ground not too boggy. In fact I quite like this part of the moor and I’m hoping the cold spell stays with us for a couple of weeks more! 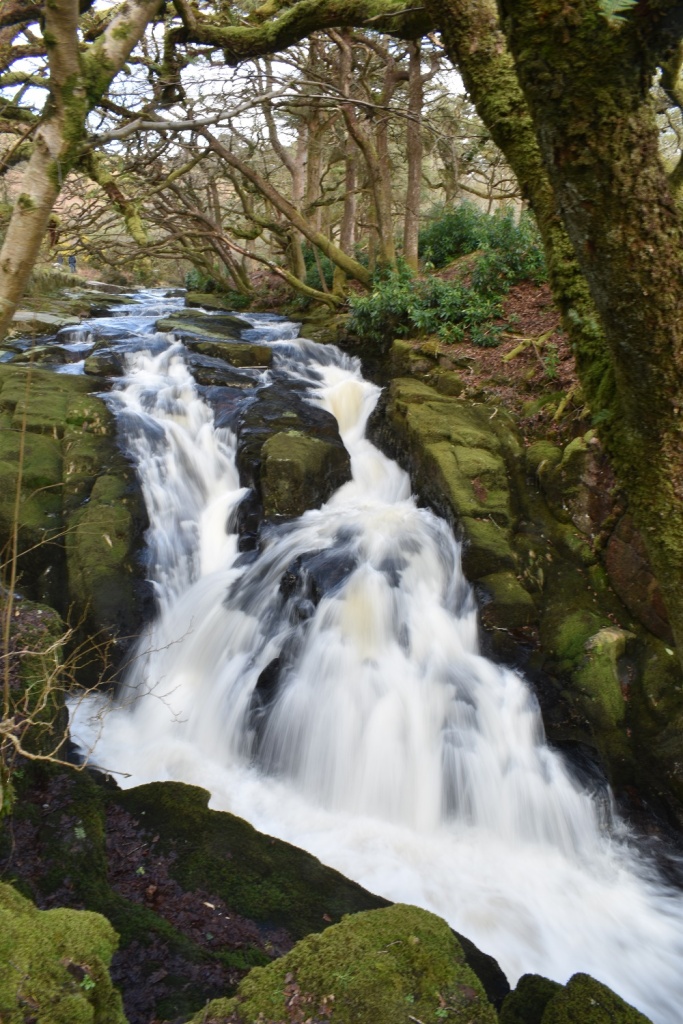 Just after the bridge this waterfall is always good value, even better after the wet weather we have had 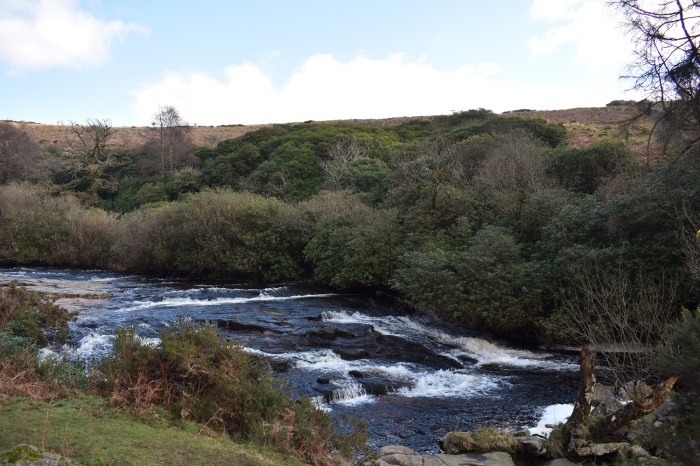 The River Avon and Shipley Tor, my last one on the route, is up on the right

The remains of Brentmoor House

Behind Brentmoor House is Black Tor, and a lovely view up the Avon valley towards Avon Dam

Black Tor, looking to Shipley Tor (follow the wall up to it) and Brent Hill in the distance

Glorious at Avon Dam and reservoir

Heading around the reservoir I look back towards the dam, Grippers Hill on the left

That’s Huntingdon Warren back right, the River Avon can be seen below and I’m heading to a point between the two, where Huntingdon Cross sits

Frogspawn!! Bit early for that surely. Hope it can survive the cold weather as its forecast to hit zero for most of the coming week

Looking back from Huntingdon Cross

The wiggling River Avon heads into the reservoir. Eastern White Barrow can be seen up on the right

Redlake looking black and moody from the climb to Huntingdon Warren, the sun is spreading that way as the moor shows its yellow and brown colour of winter

The zoom lens is on now. Rippon Tor with Haytor behind from Huntingdon Warren

North from Snowdon, the bright sunshine in the far distance illuminates the area around Cut Hill 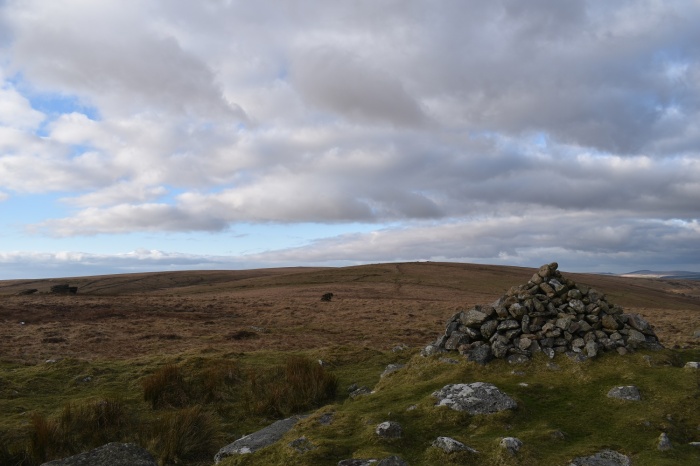 Grippers Hill is on the left, that one is next up 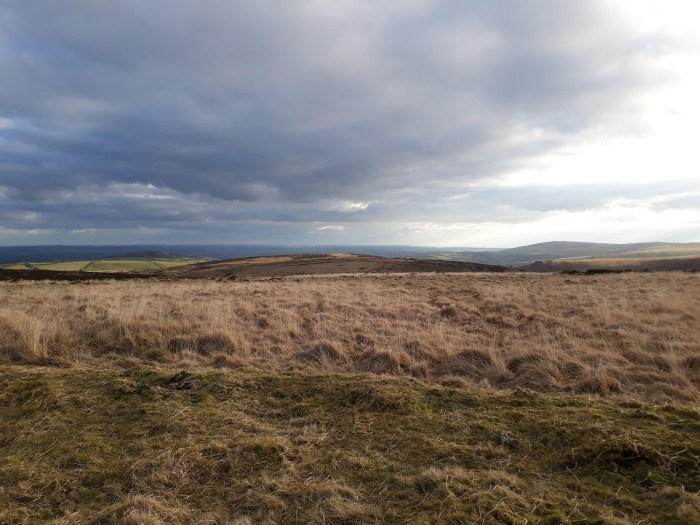 Looking back to Pupers Hill from Grippers Hill 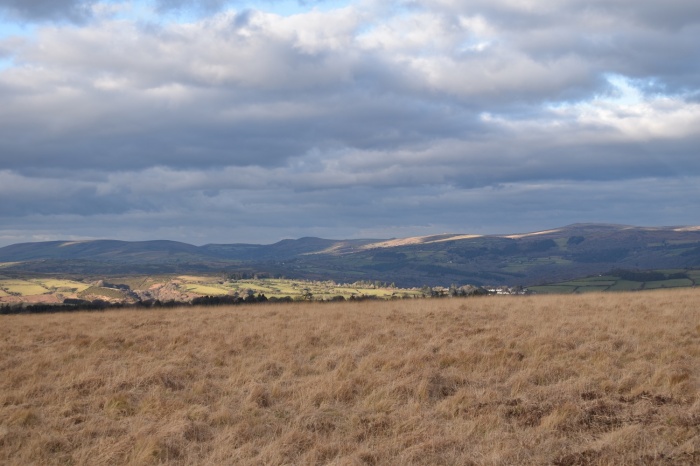 Lots of tors here starting with Hameldown left, along to Chinkwell Tor and Honeybag Tor. Then Emsworthy Rocks and Rippon Tor to the left and plenty more in between 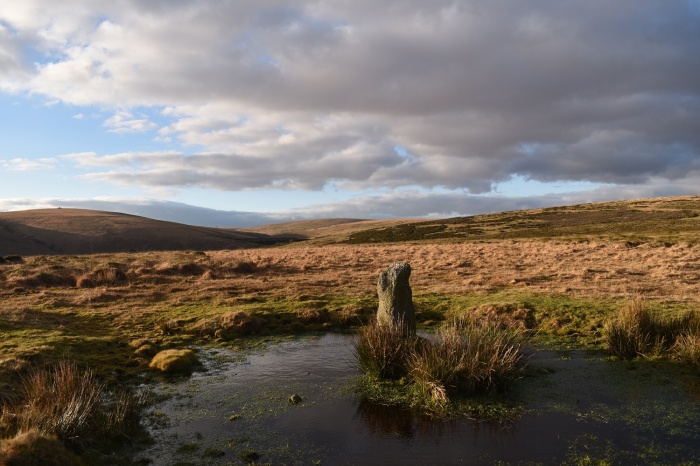 Heading to Shipley Tor I come across this upright stone with Huntingdon Warren above it in the distance. Eastern White Barrow to the left

Shipley Tor looking across to Black Tor above the trees. Some lovely light now as I reverse the photo from earlier in the walk 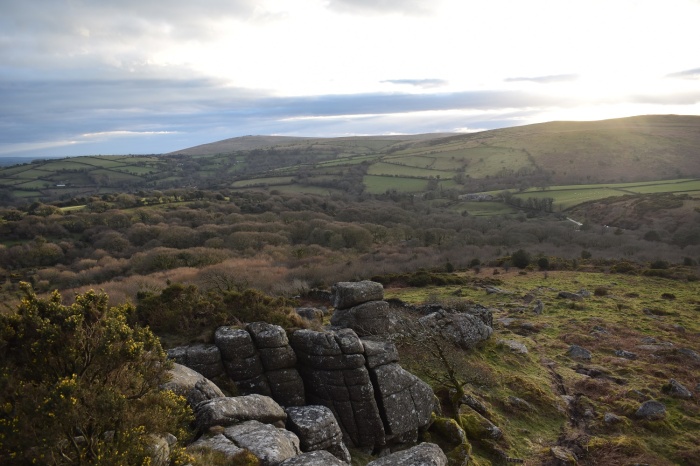 Ugborough Beacon from Shipley Tor. Now its just down and through the trees, however private land blocks the way, so follow the wall down to the River Avon head south 50 metres and hop across on the good stones