After three walks in three days we had a couple of days off, with a pootle around Ambleside on one day, followed by a trip to Keswick for some present shopping the next. We were ready for our next walk. The strange thing about this walk was that we discussed it 12 months ago when walking around the Coniston Fells, knowing we were staying in Grasmere this summer. The boys always want to know which big mountain will be their next one. Well we decided on Helvellyn last summer as this would then be their highest summit, and here we were, stood by the AA phone box on the A591, all ready to go. The weather was perfect, in fact it was ideal all day, with Helvellyn being the only 900metre plus fell in the district not to see cloud that day. This is a popular fell for a lot of the year, however coming at it from the south west seems to be the quietest way, when compared to Browncove Crags and the obvious Striding/Swirral Edges route. We had no more than 10 people on the same route as us, all the way up. We passed a few, and some sped past us as we stopped to admire the views down the Grisedale valley. I had been up Helvellyn once before, my first Wainwright back in 2010. Both Nethermost and Dollywaggon were first visits for me and I was taken aback at the views from the summit of Dollywaggon, which were amazing, the best of the day. On my first visit to Helvellyn the cloud had descended on my traverse of Striding Edge meaning I didn’t get a view back along The Edge from the climb up to Helvellyn, this time however I made sure I walked over to the edge of the Helvellyn plateau to look down and along the famous Edge. With that I was content to descend along the good path down to Wythburn before following the woodland track back to the car. This is a really good walk and the Raise Beck route deserves more attention as an ascent to Grisedale Tarn, as for next year we have already discussed that it could be Bowfell or Scafell Pike for the boys!! 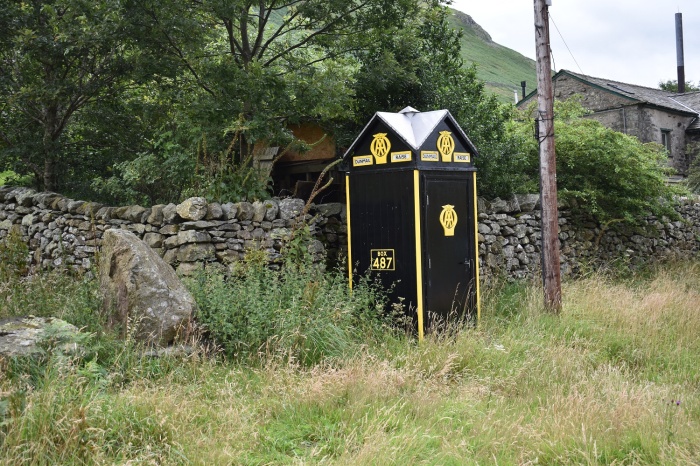 Number 487 AA box, not many of these left I believe. Our starting point today.

There is a short section through bracken first, but before long we were in the Raise Beck gill and the bracken disappeared. The dark fell over there is Helm Crag with the A591 below

Upwards on the Raise Beck path

Some great waterfalls on this path, not quite in spate this time

Steel Fell, where we where the other day as we look out from Raise Beck 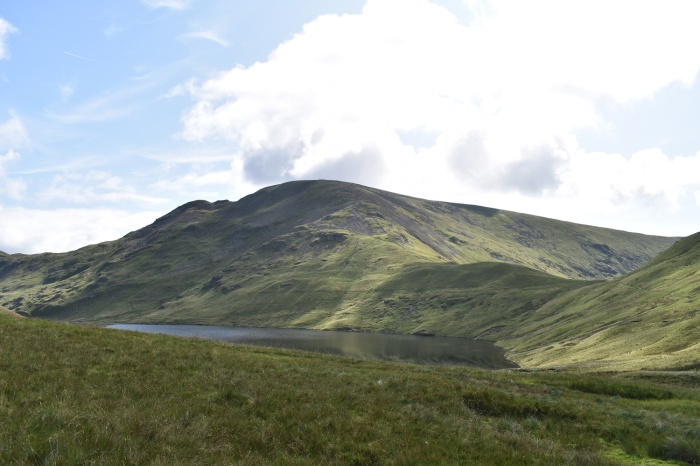 Arriving at Grisedale Tarn with a lovely view to Fairfield

After a rest at the tarn we started up the zigzag path to Dollywaggon, Seat Sandal in view to the right of the tarn. Great Rigg is in the sun opposite

Looking back down the Raise Beck route and valley. Stell Fell now backed by layers of fells all the the way to Scafell Pike and Bowfell

Wow, on reaching Dollywaggon Pike summit you get this view along the Grisedale valley. St Sunday Crag is to the right with a glimpse of Ullswater in the distance

The boys with their Uncle Neil on the Dollywaggon summit

One more look before we move on 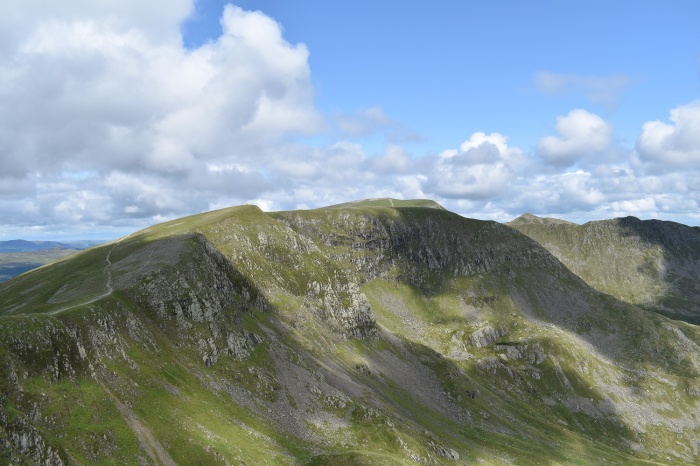 This is what is ahead, High Crag is first, then Nethermost Pike, Helvellyn is just peeking up above Nethermost, with Striding Edge heading along to the right with Catstycam the pointy fell above the Edge

St Sunday Crag on the left, the dip is Deepdale Hause, which then rises up to Fairfield on the right. In the centre distance is High Street and the Far Eastern Fells 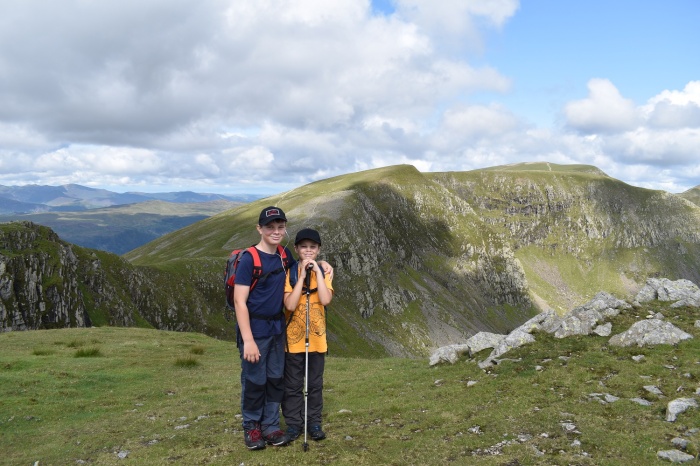 The boys with High Crag and Nethermost Pike behind them

Walking around High Crag you get great views to the west. Harrop Tarn is visible below. In the distance is Pillar on the back left, further right is the High Stile ridge

Hard Tarn below as we head towards Nethermost Pike 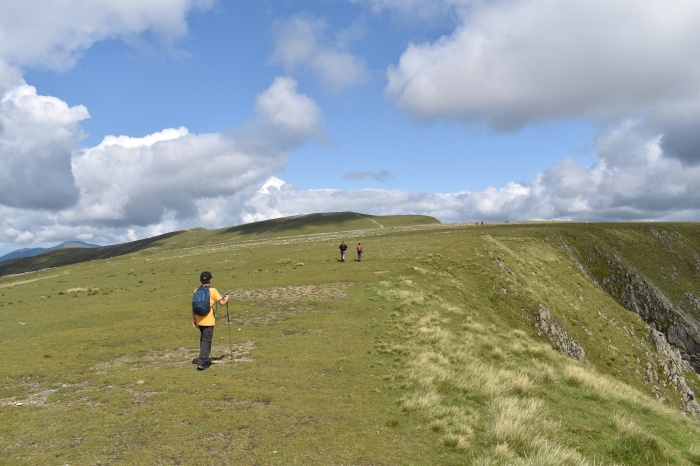 The last gradual rise up to Nethermost Pike summit

Striding Edge left, Place Fell at the end of the valley, with Birks and St Sunday to the right

Views from our lunch stop 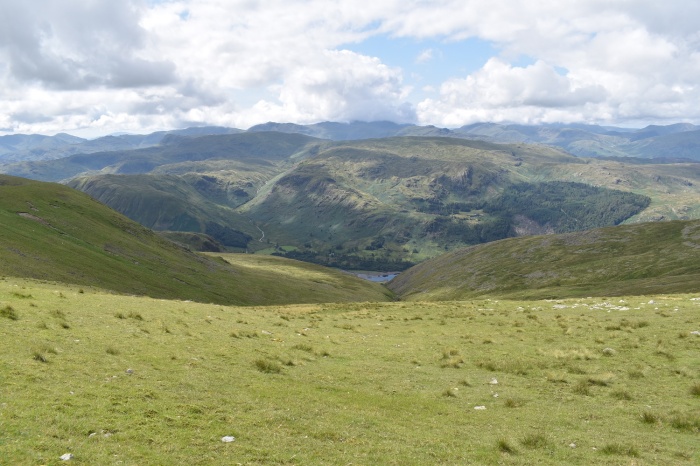 Heading now for Helvellyn and we look west again to catch a glimpse of Thirlmere, Ullscarf is the huge bulky fell above Thirlmere. In the distance from left to right, is the Coniston Fells, then the Crinkle Crags, Bowfell with The Scafells in the cloud, as is Great Gable and High Stile, the Drum House path can be seen running straight up the fellside with Robinson furthest right

We are here, Helvellyn, we’ve headed first over to the top of Swirral Edge to have a look down before returning the way we came up 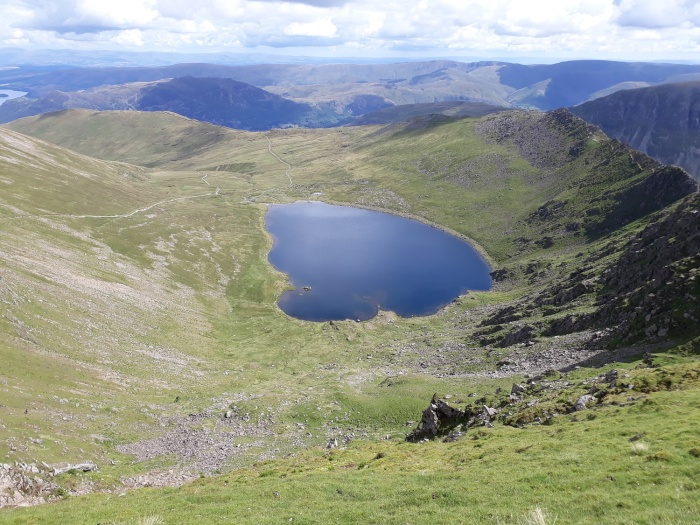 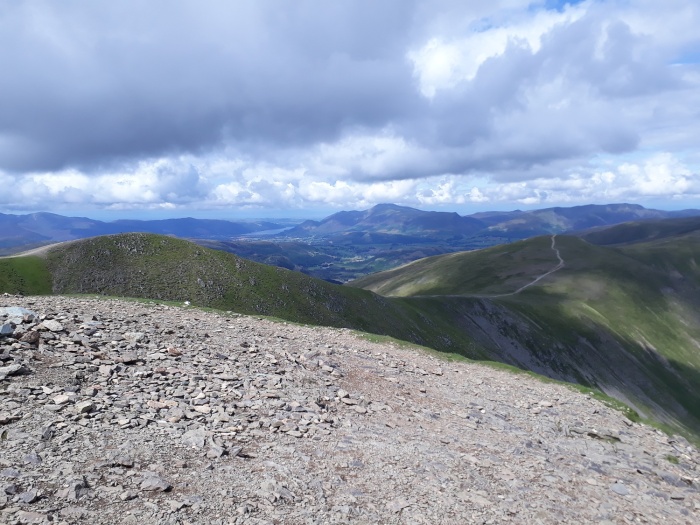 Helvellyn Lower Man on the left and the path leading to Whiteside. Skiddaw is in and out of the clouds in the distance 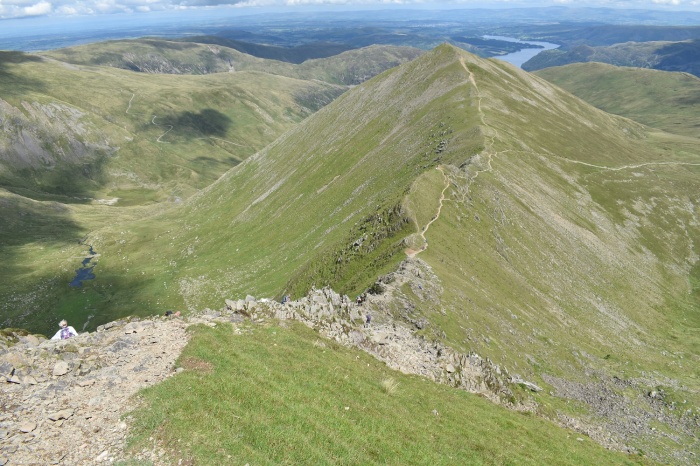 Swirral Edge is a tough decent of this mountain. Keppel Cove and the broken dam is down on the left. Catstycam extends beyond Swirral Edge

At the trig point on Helvellyn, very happy with themselves

The summit is actually just to the south of the trig point, marked by this cairn 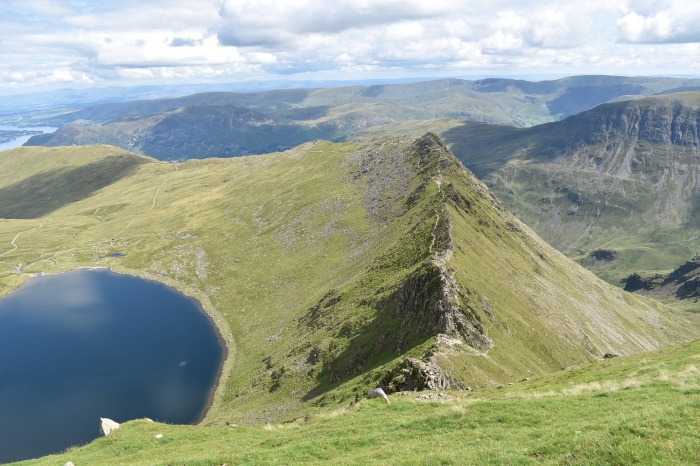 My last trip up here the cloud descended as we finished Striding Edge, meaning the final climb was in mist and I didn’t get this view along the Edge. If you climb Helvellyn its worth coming to this point just to look down and along the arete. High Spying How is the high point of the Edge and Red Tarn is below left 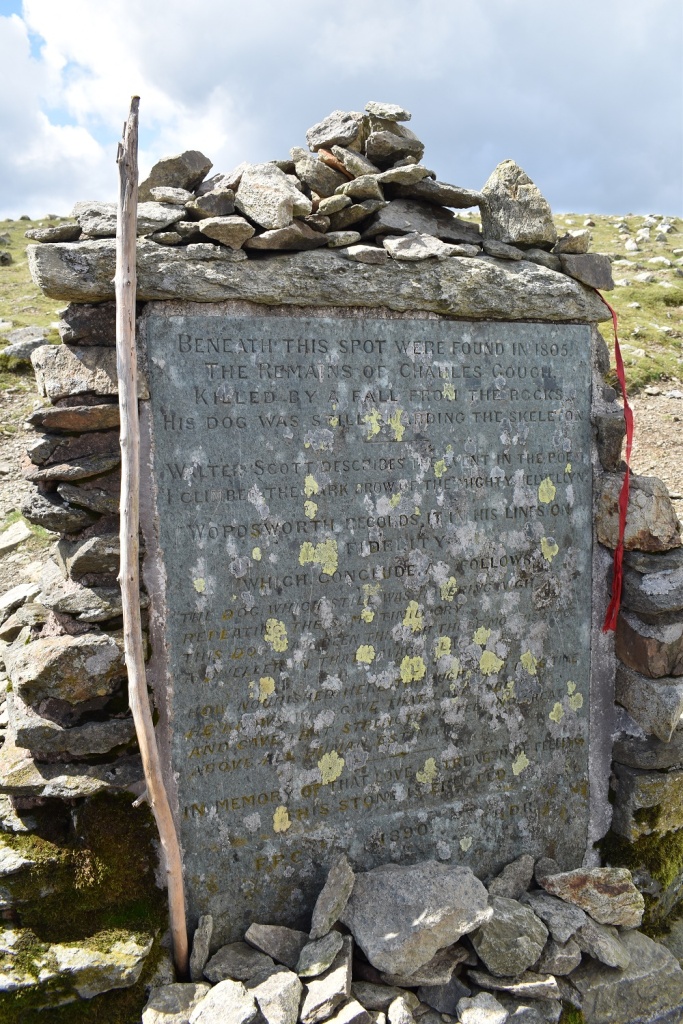 Heading back down, we will branch off on the right hand path

Further down still with all fells in view

We were following the path down to Wythburn Church, on the path you come to this prominent cairn which gives fantastic views along Thirlmere

The path we walked led us along the top of the rim to the right of photo, before zigzagging down to this spot, the previous photo was taken up on the right 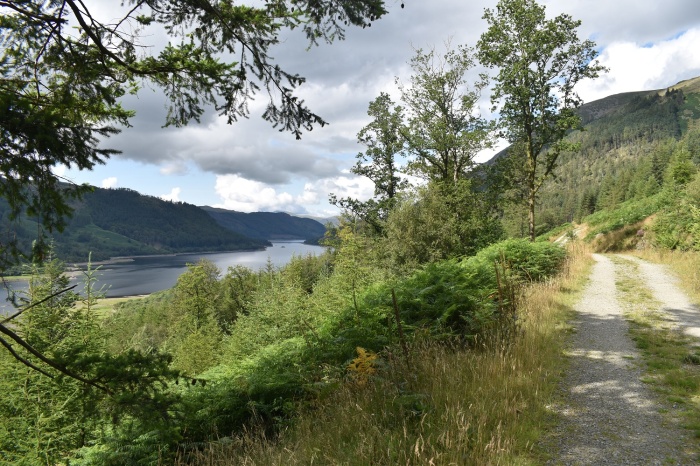 These good tracks lead through the forests and are signposted to be used between Thirlspot, Wythburn and Dunmail Raise

Final shot along the valley which splits the Lake District in half and carries the A591 north to south. That’s Longscale Fell at the far end, with the slopes to Helvellyn in the sunshine up on the right