It had been another decent weather week down here in Devon, the only slight downside was the breeze which picked up as we nearer the weekend. However by Thursday I had decided on a camp, got some food and picked an area for the tent. All this recent wildcamping by myself has come as a result of the looming decisions to be made by some pencil pushers in Whitehall. Who seem determined to prevent families and friends from seeing each other, otherwise known as socialising. However the larger people gatherings in work, pubs, restaurants, transport, schools, shops, team sports and hunting poor animals is okey dokey. Those with half a questioning brain will see that seeing your relatives doesn’t raise any tax pounds and therefore clearly needs to be the first thing to be kyboshed. So we headed out pretty much from school pickup, packed the car and off. The evenings are drawing in and we wanted to be setup really by 7.30pm at the latest to enjoy the evening. We didn’t head too far from home, and pulling into the car park at Gutter Tor I was a little worried that plenty of others may have had the same idea. I also had Sheeps Tor as an alternative, but we scouted a spot around the Scout Hut at Gutter Tor and found a perfect place. A nice sunken spot out of the fresh wind, within the approved camping area and far enough from the car to be happy. We laughed again, played cards and just enjoyed being away from a telly telling us that we are all bad people and should stay away from each other.

Our camp spot, in a little dip. The stiff wind is from behind me and the sun in setting nicely. That is Sheeps Tor over there on the right, when it got dark you could see lights in tents over that way, meaning we made the right choice being here. The army/TA were in the hut to our right. In fact one member came out to see what the laughing and shouting was about whilst we put the tent up. He left impressed at our spot out of the wind

This obviously had been a spot used before, so my youngest gathers the logs to give us a seating area, whilst my eldest clips the inner tent in. That’s Great Trowlesworthy Tor in the distance

Tea time. These were a quick option from a shop but did nicely, a quick heat in the pot and eat. The meatballs looked to be the best option, although the sauce in the chicken tikka was good also. As you can see mine is still cooking in the pot as I did the boys first, to keep them quiet

Gutter Tor from our camp spot 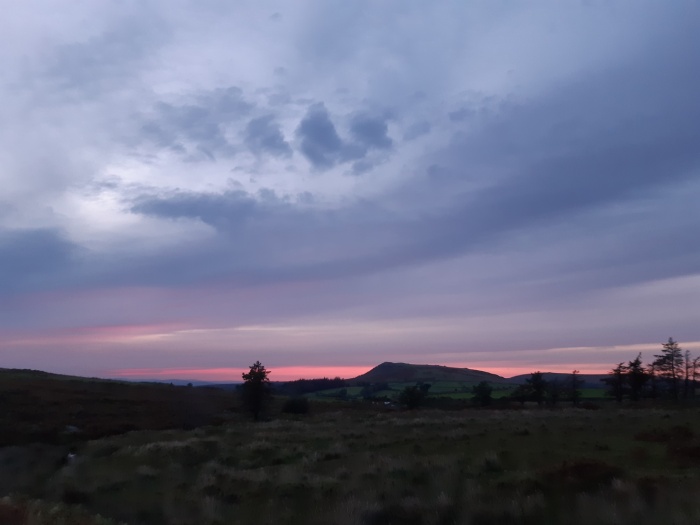 I went to get some water prior to dark. I have a good filter and boiled all the water to be safe, but to be fair the water on Dartmoor is pretty good. The Scout Hut camp is on my left in the trees and I could hear the generator running. In the distance is the red lights of the Princetown mast on North Hessary Tor, with Great Mis Tor to the left of that

I think at this point I was telling stories of the Dartmoor ghosts and ghouls, Including the Hairy hands, Hangmans Pit, Chides Tomb, Nine Maidens and others. Mu wha ha haaaaa. Before this we had played about 3 hours of Uno (the barbie version, its the only one I could find!!). Again we laughed, joked and bounced around the tent, great fun. 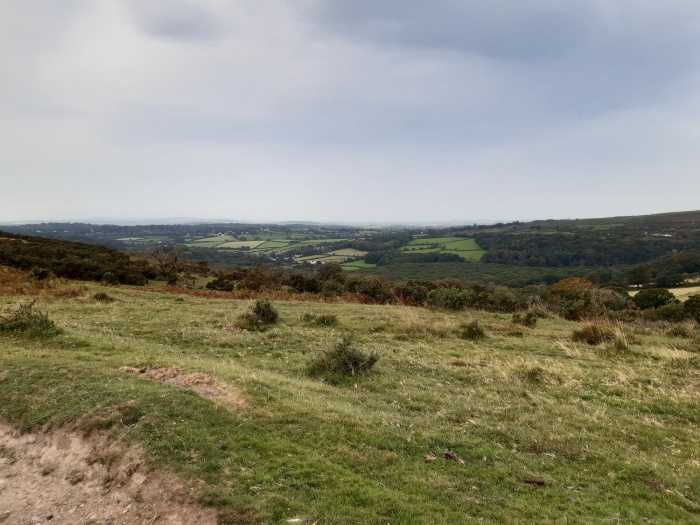 In the morning I woke to the clatter of gun fire around 7.30am. Realising after a bit that I wasn’t in a war zone, I remembered that the scout hut was nearby and the clear English shouting meant that it was an exercise using blanks by the TA/army guys we had seen the night before. I went back to sleep!! 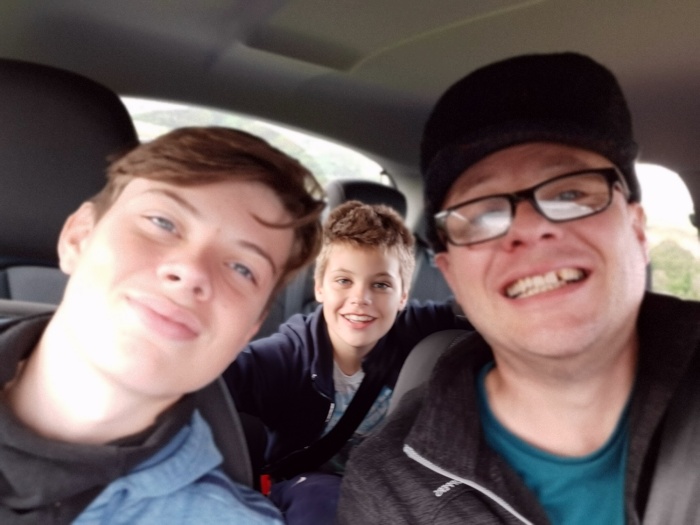 All packed up and ready for breakfast. We had, had a brew and some Belvita biscuits as we packed but now we were ready for something more substantial. We headed to Yelverton and we just missed out on the last table in a cafe, however next door The Game Larder cafe had takeaway only options. I’d been here before and I knew it was pretty good, we took away a bacon and sausage sarnie, and a pasty, plus a strong coffee for me. A fine end to a brilliant night

5 thoughts on “Gutter Tor and another wildcamp”