2020 has been the year, so far, of walking in different places where possible. That has meant plenty of woodland walks of eastern Dartmoor and some coastal walks to change the scenery a bit. This is partly due to the amount of rain we have had since October leaving the proper part of Dartmoor at little damp to say the least and whilst normally that wouldn’t stop me, I’ve fancied a change if I’m honest. Some of this walk I’ve done before, well the bit around Mount Edgcumbe, and I’ve also driven to Rame Head and walked to the chapel, but all this in one go is new for me. Now this is another part of my 2020 different places walking, going back to areas that I visited 10 years ago and walking around more of it. I guess its the same as picking a mountain you’ve walked up before and choosing a different route up it. Now this route started from one of the car parks overlooking Whitsand Bay, there are a few along this coastal road towards Rame. I headed anti clockwise, firstly to Rame Head, then

Something different today, but more of this coming over the next few years as I attempt to get around as much of the south west coastal path as is possible, over no doubt, dozens of walks. Now this picture shows a common theme today, sheets of rain heading my way, blown by a 40 mph wind. Now some of the waves below will give an idea of the wind, but on parking my car I assumed I hadn’t put the handbrake on as the car was rocking still, which may give you a truer picture of the strength.

Polhawn Fort, now a private hotel, this is the coastal path and it passes around the back before rising up to the headland

Plenty of wildlife in this area although the birds were wisely on the ground in this wind!

Whitsand Bay. now the white ish spots dotted along the cliff to the right are holiday homes/chalets. They are fascinating, they are one bed wooden huts with astounding views. The waves were crashing against the rocks below 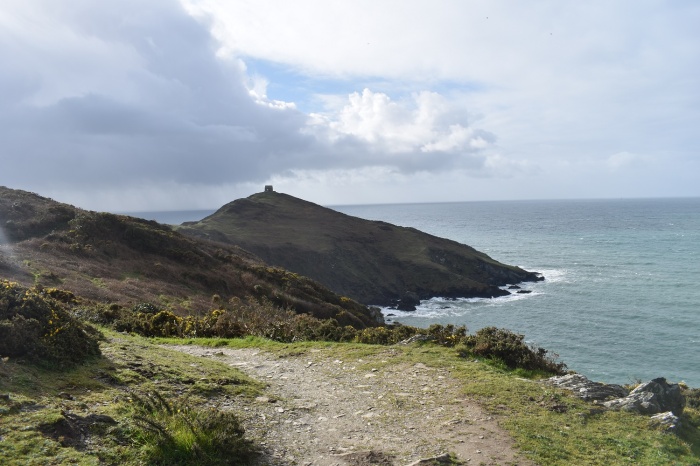 One of the highlights of this walk. Rame Head and the chapel on top

I’m at the chapel now. This was naturally a WW2 gunnery placement, used to protect the entrance into Plymouth Sound and the Devonport dockyard. That’s Penlee Point sticking out over there, also a gunnery placement (the largest in this area). And beyond is Wembury Point and the tiny island is the Mewstone 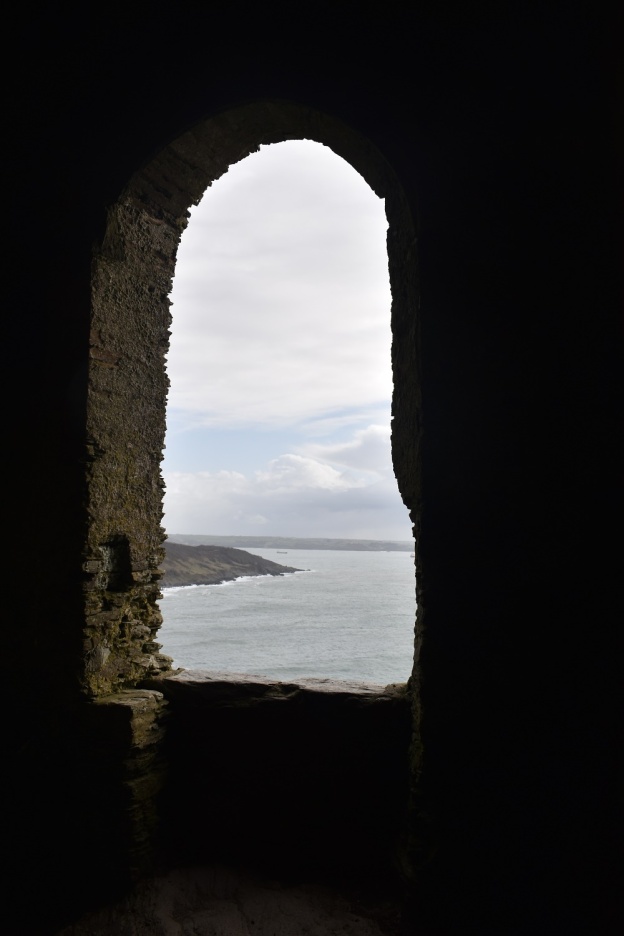 Inside the chapel looking at Penlee Point 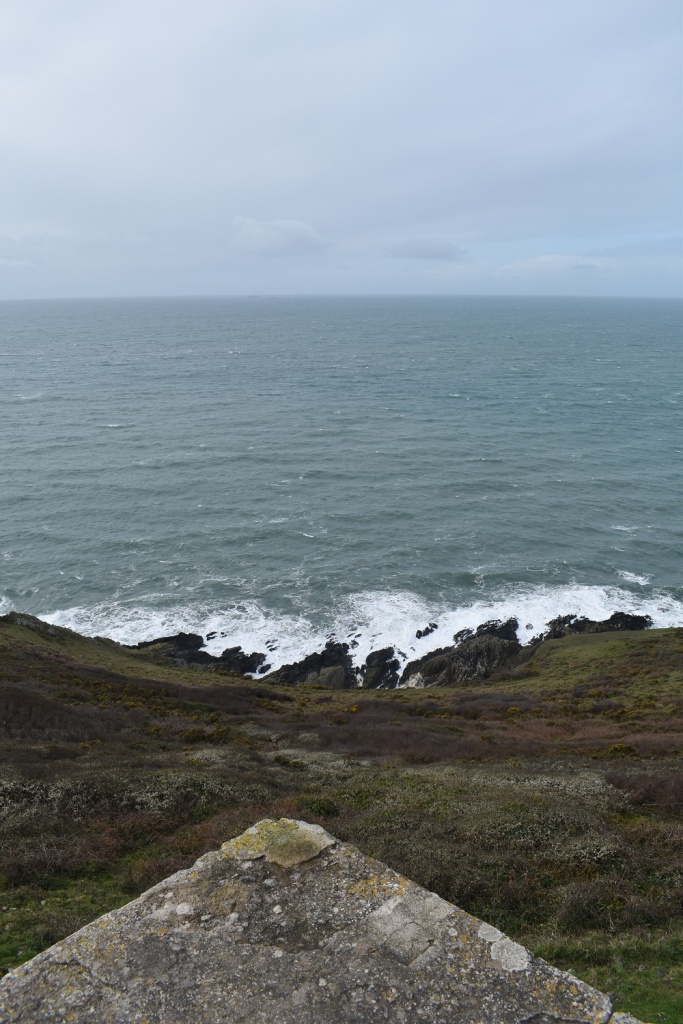 Some lovely blue sky and the sun had warmth to it along here. Rame Head in view and up to the right is the coastguard station with the mast

Heading to Penlee Point, the Mewstone beyond

I had coffee and snacks here, it would have been rude not to enjoy the view 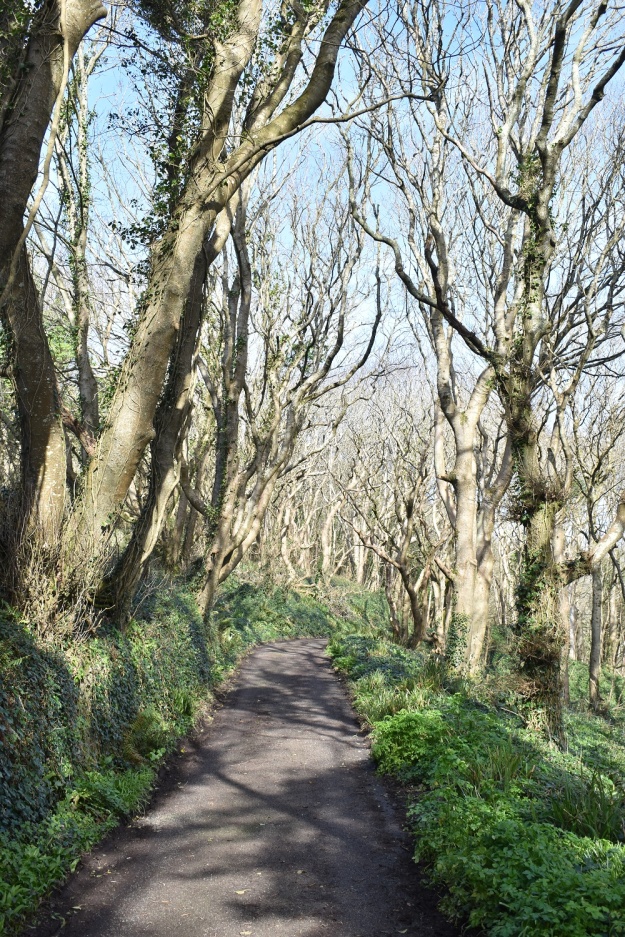 Through the trees towards Cawsand 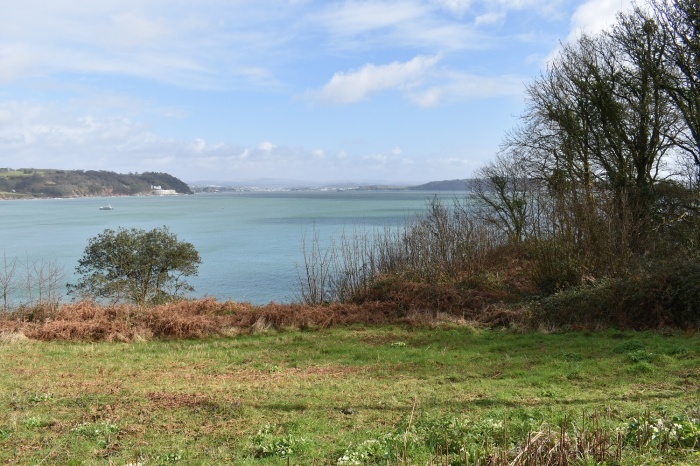 There was a house behind me, in this clearance, with this view across Plymouth Sound. Fort Picklecombe is the obvious white building on the left

Cawsand beach, another of those showers has passed over me. I was on and off with the waterproof today. Fort Picklecombe on the left again and the area around Staddon Heights straight ahead

Coming into Cawsand and Kingsand. That’s the Kingsand clock tower. Now back in early 2014 this place was hit by an enormous storm, see below pic from the BBC website, it undermined the foundations and the tower was close to collapse, thankfully it was saved and has withstood, so far, any further storms.

Thankfully today it is calmer with Fort Piucklecombe catching the sun on the left. I’m heading there next 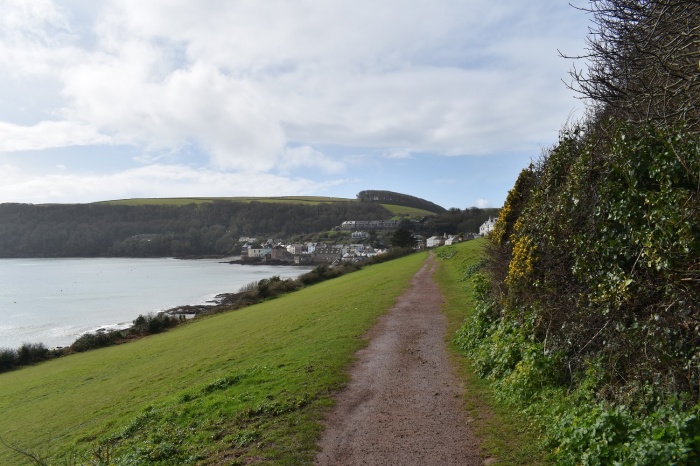 Looking back to Kingsand and Cawsand

Penlee Point and some lovely warm sunshine out of the wind 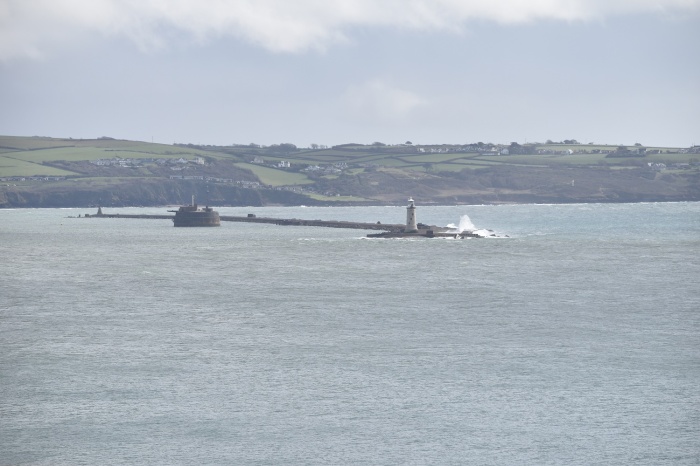 The Breakwater, which protects Plymouth Sound, some waves crashing against the barrier

Almost at Fort Picklecombe, now private residencies, across the breakwater to Staddon Heights and the Mewstone out to the right 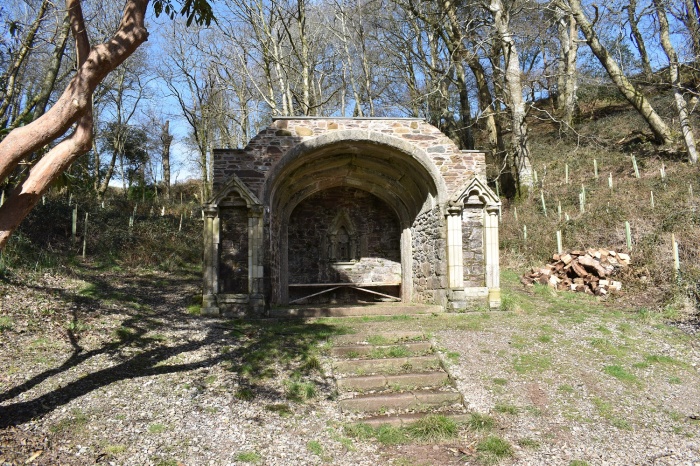 Picklecombe Seat. A gothic style alcove temple which sits above Fort Picklecombe and the coastal path. Not a bad spot for a bite to eat and a brew

Now to get from the last photo to this one, the coastal path took a detour, a bit of a landslip or fallen tree has meant the path zigzags stupidly uphill, back and forth to get you to a field and then across here before dropping 100 metres back to the sea. Farcical. I ignored it and contoured around the so called fallen tree to this spot. where the detoured path ends up anyway. A fine view from a wooden balcony to the breakwater

Being up this high I stayed up knowing that I would hit this spot. Probably the best view of Plymouth from anywhere. The Folly in Mount Edgcumbe looking to Plymouth. Dartmoor is beyond Plymouth, in fact Lee Moor is just left of the Folly 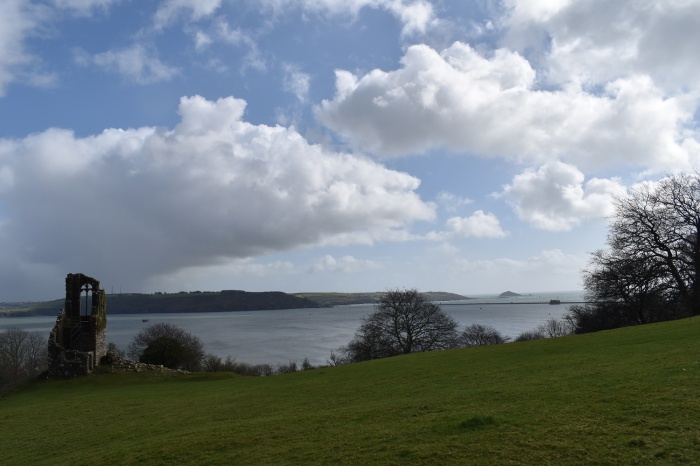 The other way the Mewstone far right and the Folly

Drake’s Island, now has planning permission (after many, many years of trying) for a hotel and spa and other stuff to make money

Just after the Folly you enter an area which holds plenty of camellia bushes. Mount Edgcumbe is famous for them and despite the rubbish weather they are flowering now. There are literally hundreds of them 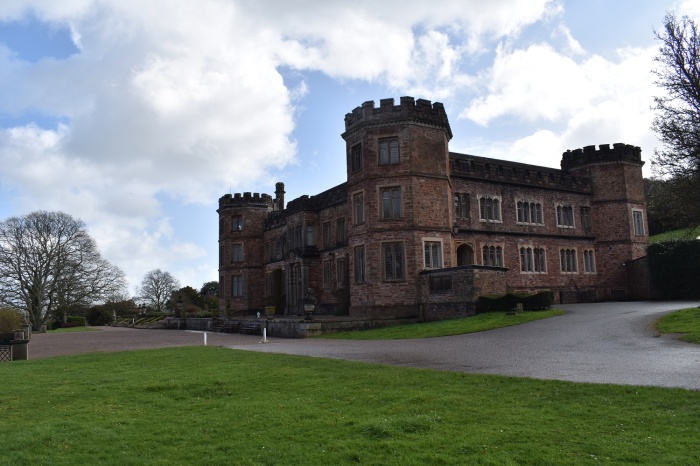 This is Mount Edgcumbe house. A magnificent Tudor mansion built around 1520. It has some fine views and plenty to see here for a good half day explore. Owned by Plymouth City Council and Cornwall Council, I used to support the IT within this building, and was always one of the best site visits you could have!! 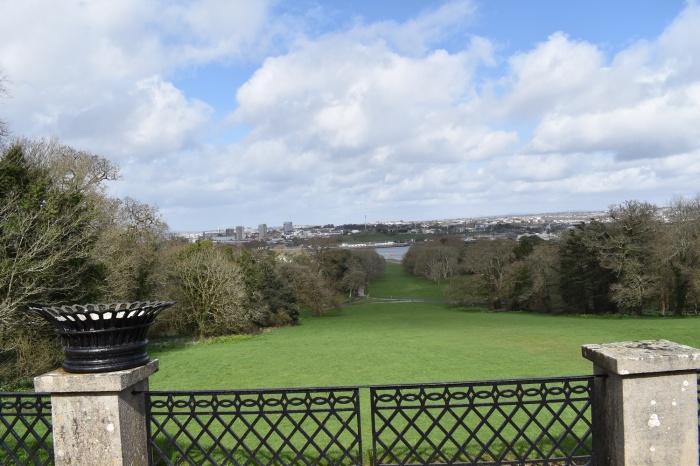 I left Mount Edgcumbe and picked up a path to this spot. Maker Church, I then followed the odd field path and road down towards Millbrook

Bodmin Moor back left and Kit Hill back right, beyond the towns of South East Cornwall

Not this time, or not quite anyway. I was grazed by this dumping of rain. Plymouth is about to get soaked!! 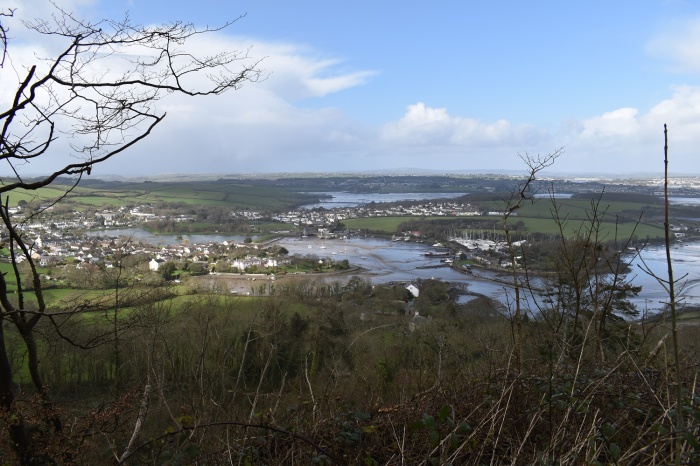 Millbrook and lovely little village in South East Cornwall. the inlets of water are from the sea and the River Tamar, which is over to the right here 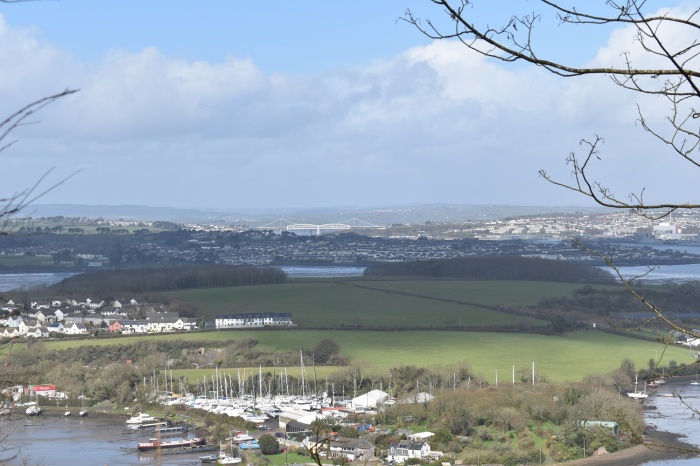 A bit of zoom shows part of the River Tamar and in particular the Royal Albert bridge at Saltash in the sunshine, centre photo, which spans the Tamar and carries the railway over the river into Cornwall. Built by Brunel in 1859 it is a fine bridge and very recognisable structure in these parts

Maker Heights is the high point up to the left, the building in the middle is the Fourlanesend school. Which is on e the road out of Millbrook towards Mount Edgcumbe

The Mewstone stands proud as I look across Plymouth Sound. The lanes back towards Whitsands give some fine glimpses of views in all directions

Back at the start, the tide is out somewhat and the white water is pounding the beach, so that has changed. However the wall of rain is still there and still backed by that pummelling wind. Now for a quick jog to the car 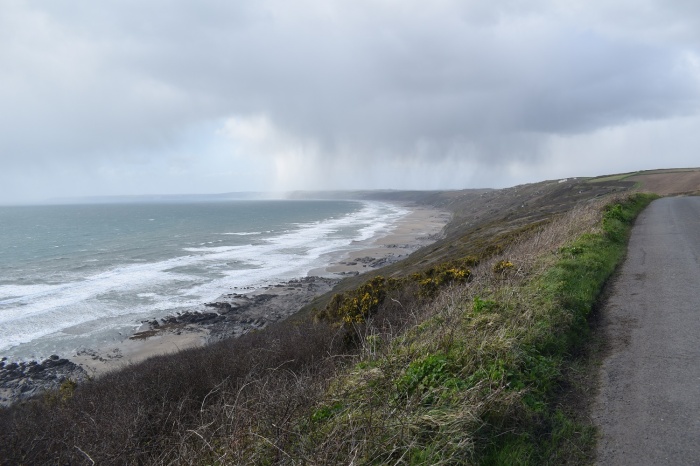 The beach of Whitsands Bay. Not for the feint-hearted this one. There are plenty of place to get cut off by the tide and the climb is back up to this spot as this is where you park. Go further west to Seaton is my opinion! The end of a great walk and less about searching a woodland for a tor, which has been a lot of fun whilst I have done it. But more about just walking a path and enjoying what is around me. Bring on more of this.

3 thoughts on “All around Rame Head”