I’d had a few ideas of routes to get to my true target on this walk, Quintins Man. I could have started from Postbridge, Rowtor or Fernworthy, I chose the latter as it gave a better circular walk than the others, which ultimately turned out to be a loop around Great varracombe. I wasn’t certain what to expect underfoot when i was planning a route a few weeks ago, however I need not have worried, the cold weather on Dartmoor and  a little snow had left the ground pretty well frozen hard, the grass was all white and crisp with a hoar frost everywhere. Once up on to Quintins Man I had a fantastic walk across to Whitehorse Hill, 5 layers and two hats were worn for most of the time above 550metres as the wind was cutting. Brilliant day out and worthy of my last long walk on my list, just Brent Tor to do now. However it does mean i can start again!! 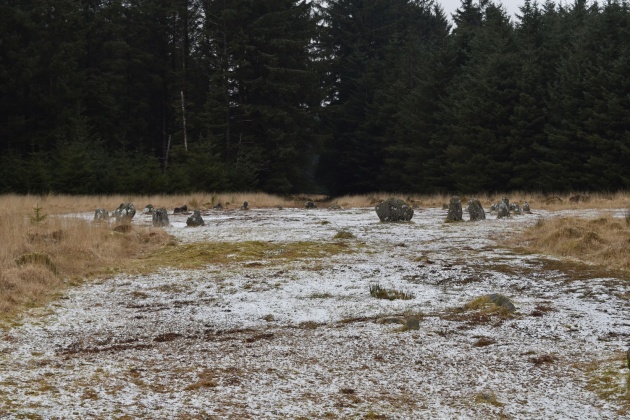 Not too far from the start is Fernworthy stone circle

South is Sittaford Tor, this is the way I’m heading as I’m doing a clockwise loop 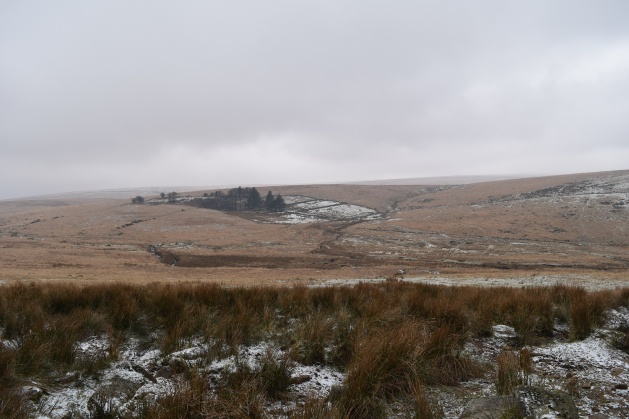 Teignhead Farm is in the trees, my route will follow the hill behind (just seen at the back in light grey colour). I stood here for 10 minutes talking to a fella about his ten tors training days with the Air Cadets

Now at Grey Wethers, a double stone circle with a part of Fernworthy forest behind 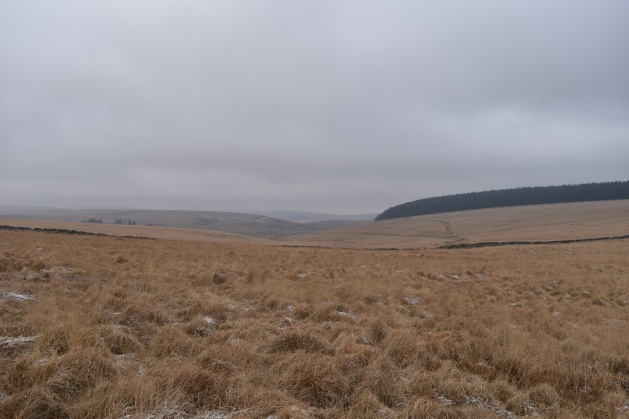 From the same spot looking down to Grey Wethers, its a little easier to see them with the yellow grass, as opposed to the green of summer

Looking south from Sittaford, the sun was piercing the clouds at this point

Quintins Man is at the top of that wall that runs up the hill, heading that way in a bit after some hot Ribena and a biscuit or two!!

God’s out with his torch again, he must have lost something on Winney’s Down!!

The palette of the day was grey, with hints of white and yellow 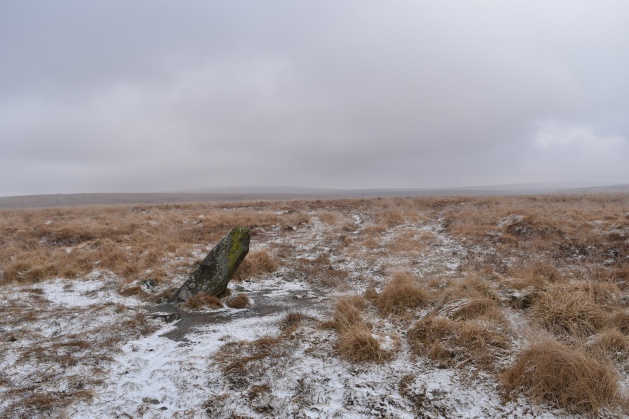 This stone marks the spot for the newly found Sittaford Stone Circle, the second largest in the moor. The only downside is all the stones are lay flat. No one is sure if that is by design or they have fallen, although the odd supporting stone has been found which could suggest upright was the original position

Here it is, 4000 years old or so. The sleeping stones of Sittaford!!

Sittaford Tor is just up there not far from the circle

After a quick down and up again I find myself at Quintins Man. Its absolutely arctic up here. That’s Cut Hill beyond the army huts (this tor sits on the edge of the Okehampton range)

I didn’t make use of the wind shelter as standing still meant I froze to the spot!!

Normally a boggy trudge but today was as hard as the granite famous in these areas, Whitehorse Hill ahead

Cut Hill again and Fur Tor just peeping up to the right, the hoar frost on the grass was everywhere up here 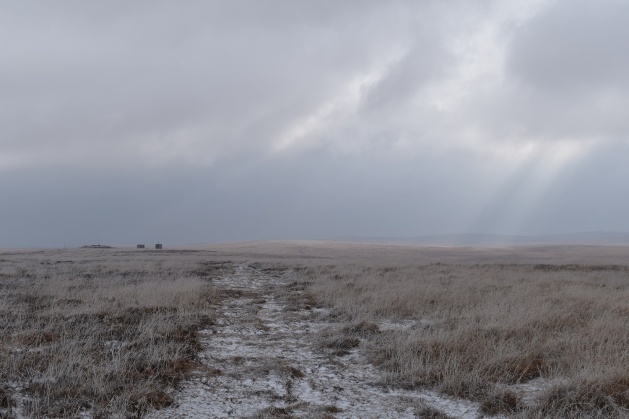 Looking back to Quintins Man as the second hat went on

To the west there was an amazing sky with orange and pinks all over. Hare Tor is the tor sticking up

Near the summit of Whitehorse Hill, the valley left in the distance is the West Okement. Right of picture is the hut on Hangingstone Hill 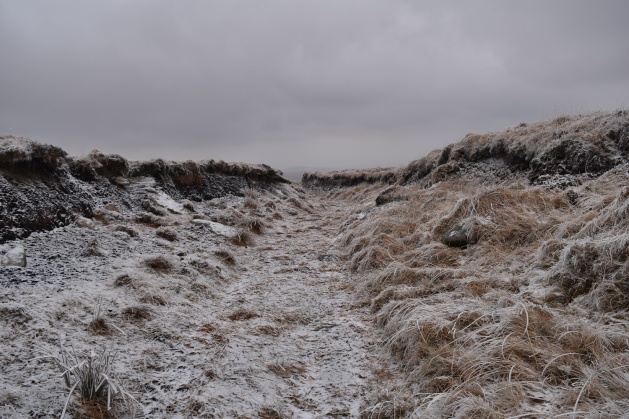 Close up on the freezing grass

The great wall on Manga Hill. Below the bright area of sky is Quintins Man

A few trees can be seen left of photo, marking the Teignhead Farm, where I’m heading next. Sittaford Tor is the high point centre. The terrain here was firm underfoot but very rough ground with long grass and hollows. As I nearer the farm in the trees there was a good path to my left, i should have headed further left after the wall. 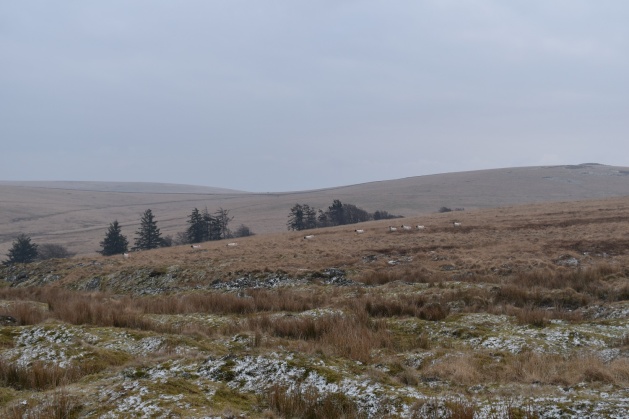 Ice hangs from the grass above Varracombe Brook

Teignhead Farm, a great wildcamp spot lies just to the left of this photo. In fact there was a fair bit of wood gathered ready for a fire, just dry sticks and tinder needed

These two have decided to stay the night!! 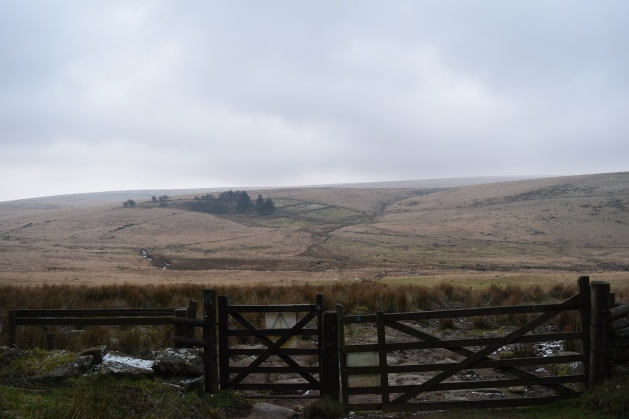 Back at the gate into the forest with my route on the horizon and less snow than when I got here about 3 hours or so ago. The forecast is for warmer weather so I’ve had the best of the snow and frozen ground I’d say. It was a absolutely superb walk