3 days into the holiday a no proper walk for me so far, yes I’d had a couple of little walks to Latrigg and Aira Force but the hot weather had held me back. Tuesday looked good, the temperature said it would drop a few degrees but the sun would still be out. It was off to Hartsop to do a walk that on the map below looks like and inverted M with the lines joined along the top. I had originally planned to just do 4 fells in an out and back, but a conversation on facebook suggested this would take maybe 3-4 hours. I decided to do an out and back to Gray Crag and loop around again thus ticking off 3 fells in the middle (Mardale Ill Bell, High Street and Kidsty Pike). One thing I noticed on this walk is how close High Raise, Kidsty Pike, Rampsgill Head and The Knott are together, why then has it taken me 3 different walks to do these 4 fells. Need better planning for round number 2 I’d say!! One thing to say about this walk is the start, there is no warm up at all, 50 metres and you start up and its steep, straight up the nose of Hartsop Dodd. Half eight in the morning and I was sweating, the temp was probably rising above 20 degrees at this point already. However once you are up above the 600 metres contour, with the exception of Threshwaite Mouth the rises and falls are gentle and easy to walk. The high point on this walk is High Street and whilst the summit area is vast and flat, make sure you head east and look down to Blea Water and the Long Stile ridge, a great way up this fell. I made 9 Wainwrights here on this walk, with 7 new ones which took me to 128 in my total. Starting to think about my final one. 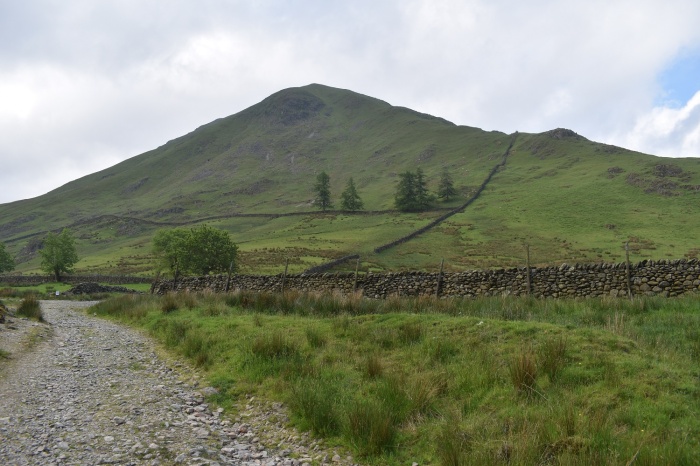 Hartsop Dodd and its much steeper than it looks. You follow the wall up to the right, join the ridge and then up, the wall is also on the ridge in parts which means from below you think you can see the summit cairn. Which it isn’t, very annoying!! 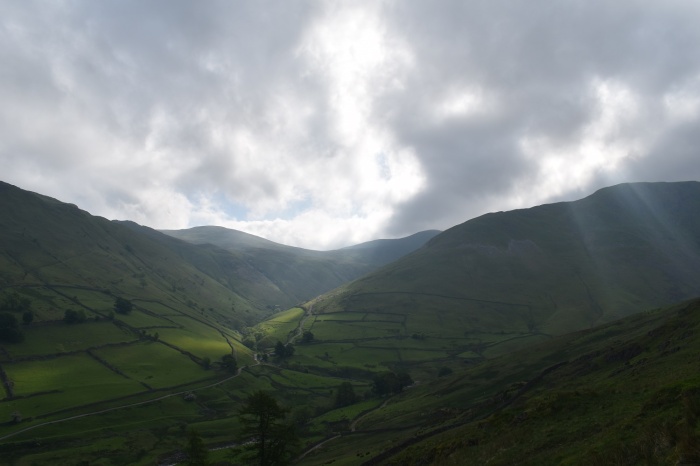 God has his torch out again!! That’s Gray Crag to the right (where I will be in a couple of hours) and in the distance Rest Dodd to the left (not on this walk) and right of that, partly hidden by Gray Crag, is The Knott, my last one today 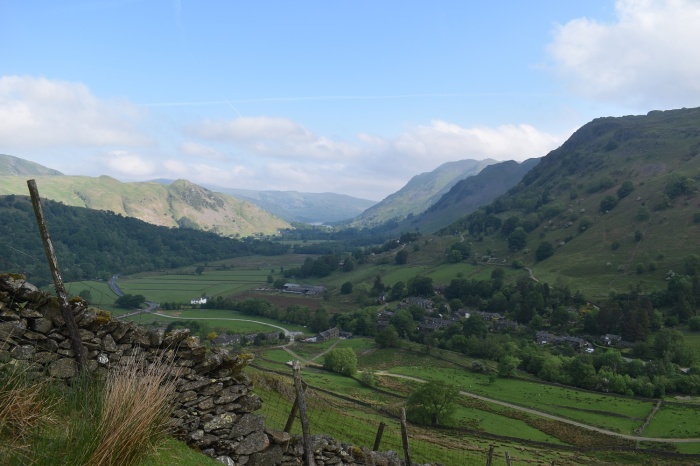 Heading up this way gains height quickly but means you stop to catch your breath a fair bit. That’s the valley heading towards Ullswater, plenty of sunshine that way but I was glad of the shade on this the steepest part of the whole walk

And now I’m heading up the ridge, Brothers Water down on the left, Hartsop in the trees down there. Brock Crags, Angletarn Pikes and Place Fell on the right with Arnison Crag to the left 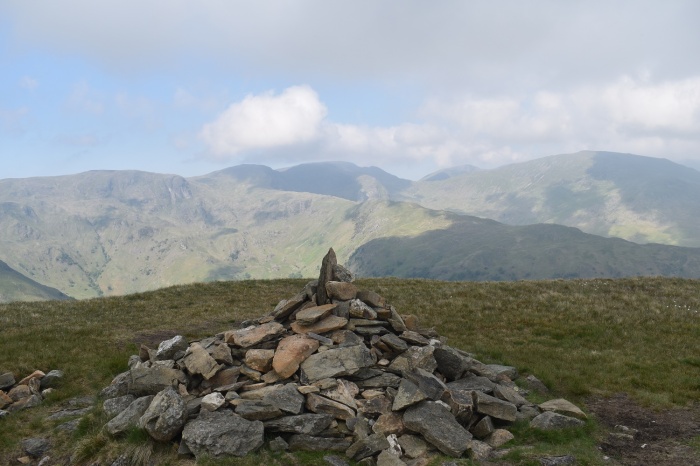 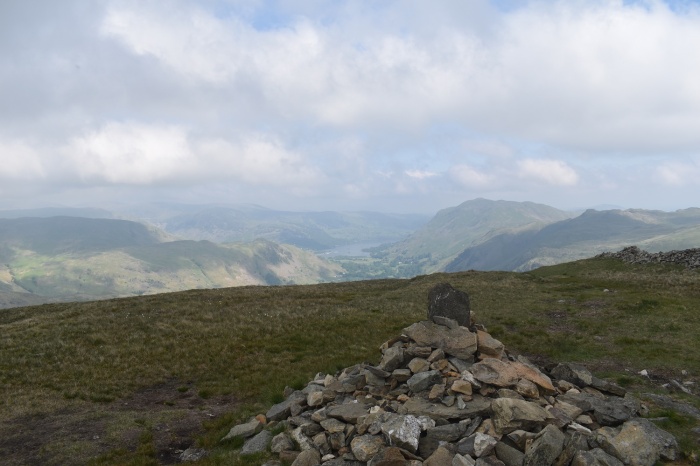 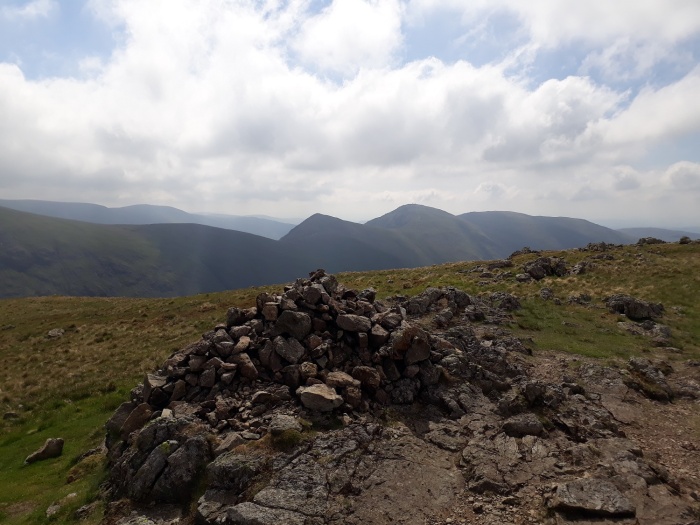 Caudale Moor summit. Silhouetted behind is the Ill Bell ridge 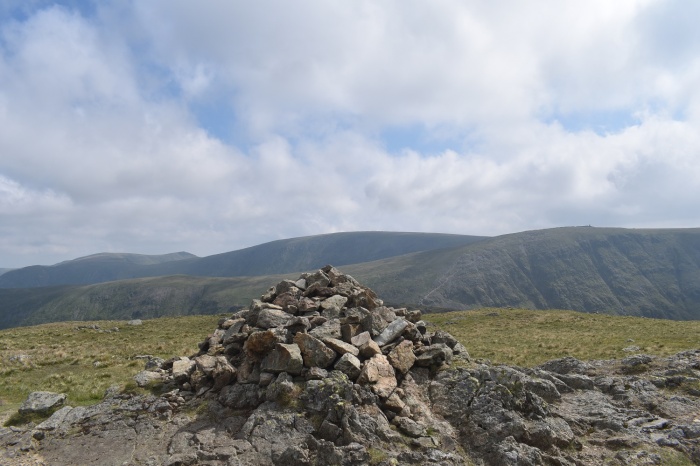 My first proper look to High Street, directly above the cairn. The Thornthwaite Crag ridge is between me and High Street. At this point I hoped to get to High Street as I was making good time 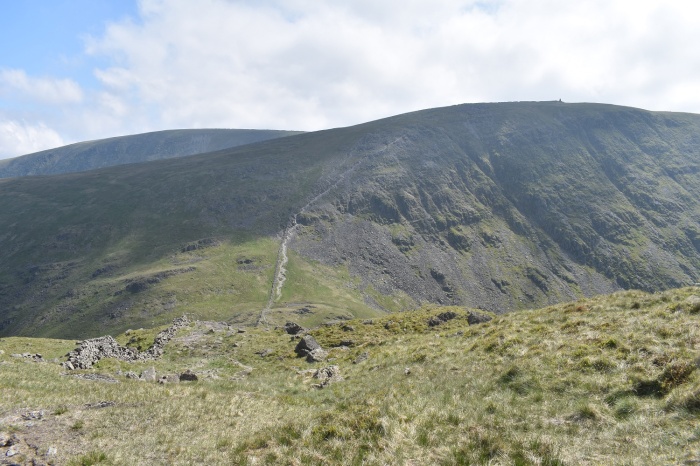 Down to Threshwaite Mouth and then back up to Thornthwaite Crag, at this point I decided I would contour left out at the point where the shadow starts on the path up the other side, and this would take me over to Gray Crag first

Same spot just turned around. This is Pasture Bottom (I giggle every time I say this place). Gray Crag up on the right 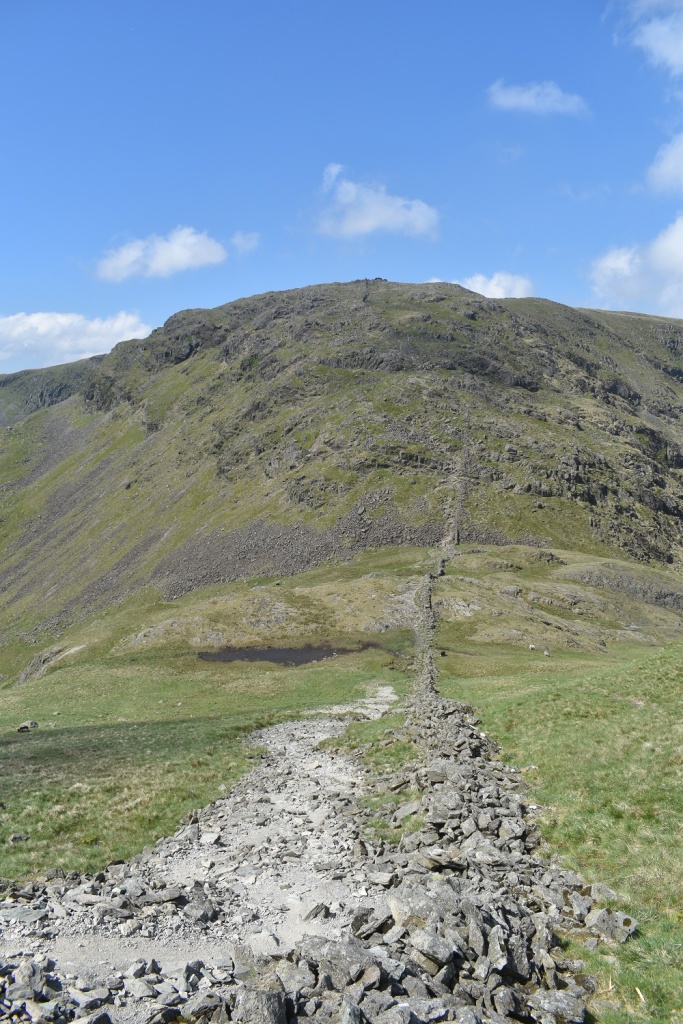 Fairly straight forward to get to Gray Crag. The Knott sticking up on the right 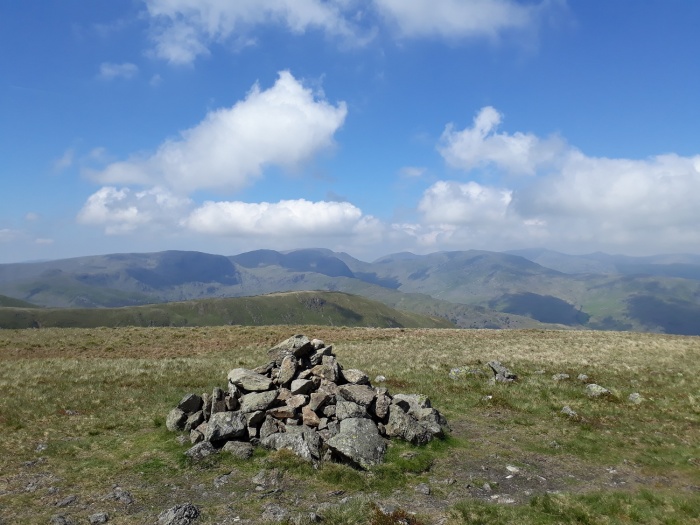 Lovely views to Fairfield and Helvellyn from Gray Crag 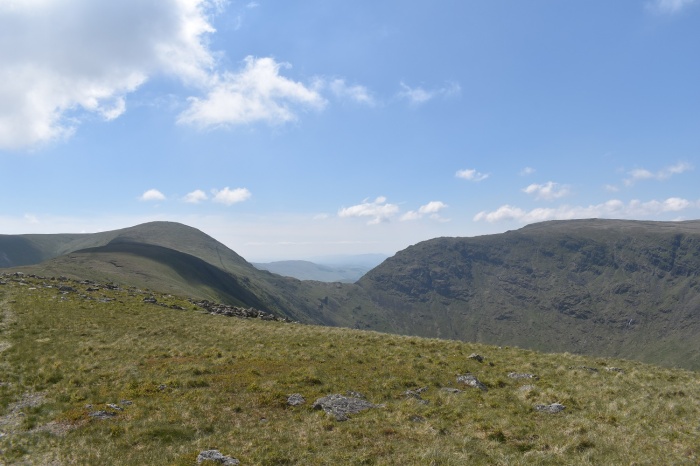 Thornthwaite Beacon and probably the windiest section of the walk, still baking hot though. Ill Bell looming large to the left and a piece of Windermere in the distance

A very clear path to High Street, I would start along it a then branch right to Mardale Ill Bell 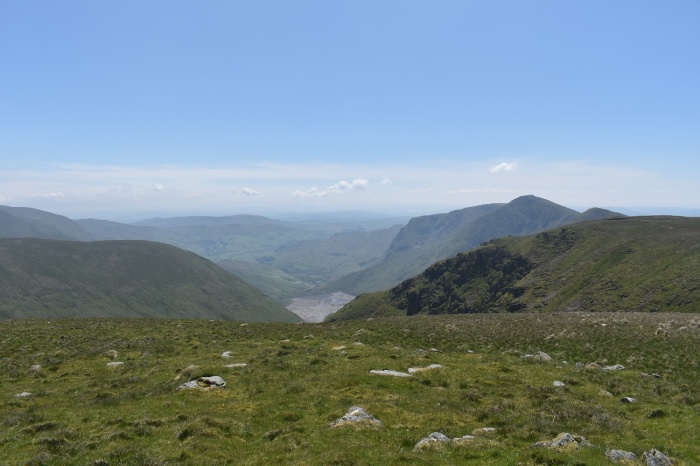 Around the head of Kentmere here and looking down at Kentmere Tarn which I heard from another walker was having repairs to the dam hence no water in it currently. This path to Mardale Ill Bell was glorious to walk on 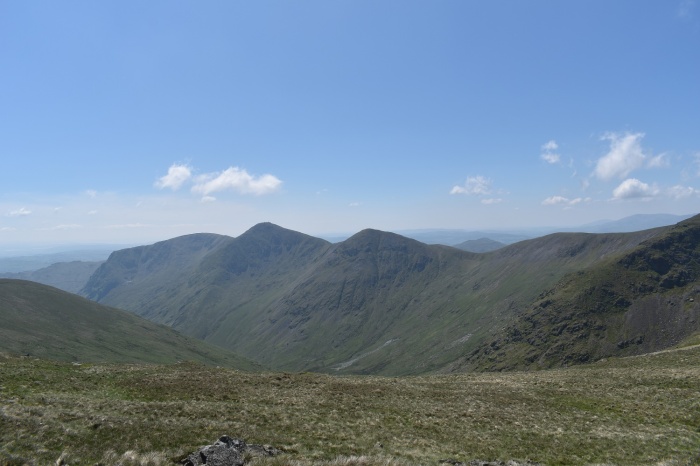 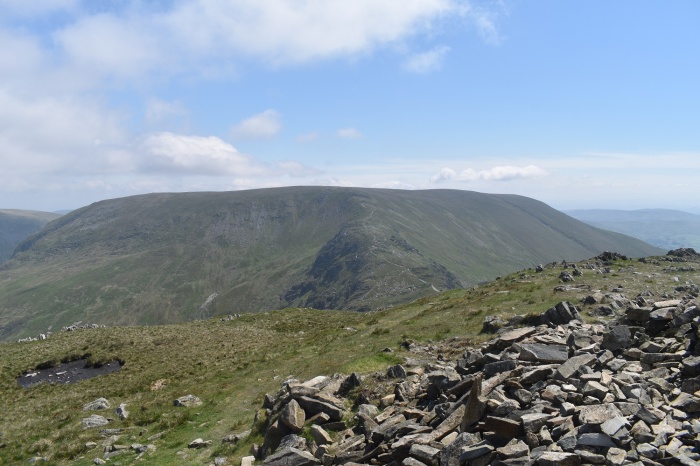 This was probably my first ever look at Harter Fell. I was staggered at how big it is, its huge. So was so surprised that I forgot to walk that way and look down to Small Water. I’m now on Mardale Ill Bell

I did take a peek down to Blea Water though. I could have done with a dip in it at this point

Looking to Haweswater and Mardale Head below

A short pull up brings you to High Street, the views from the summit trig will not win many prizes, head west first to look over to the Helvellyn range and beyond Hartsop. Before doubling back and following the grassy path to the top of Long Stile and look at a fabulous view down

Rough Crag and the Long Stile ridge, fantastic. Blea Water down to the right and Haweswater beyond. Riggindale down to the left, just a superb place

Looking across to Kidsty Pike and High Raise peeking up beyond

Kidsty Pike looking to High Raise, doesn’t look like much of a fell this Kidsty Pike until….. 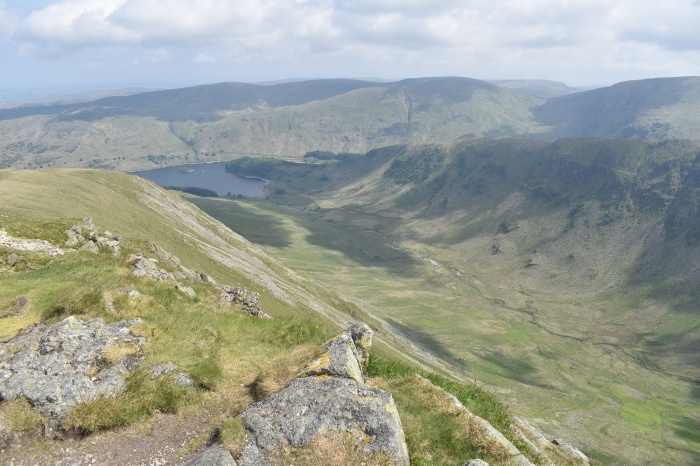 You turn around and look down into Riggindale and across to the Long Stile ridge opposite. Branstree is in the distance

This is Rampsgill Head. To be honest on this walk if you like U shaped valleys you are in heaven. Troutbeck, Pasture Bottom, Riggindale, Kentmere, Rampsgill are just some on view 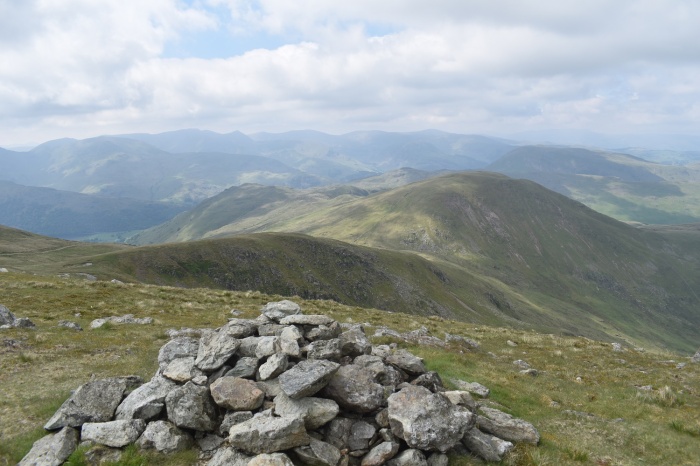 Looking down to Rest Dodd

My last one today, which is The Knott

Rest Dodd left and then The Nab just right of that

Heading down with Brock Crags up on the right

Hayeswater with High Street up on the left 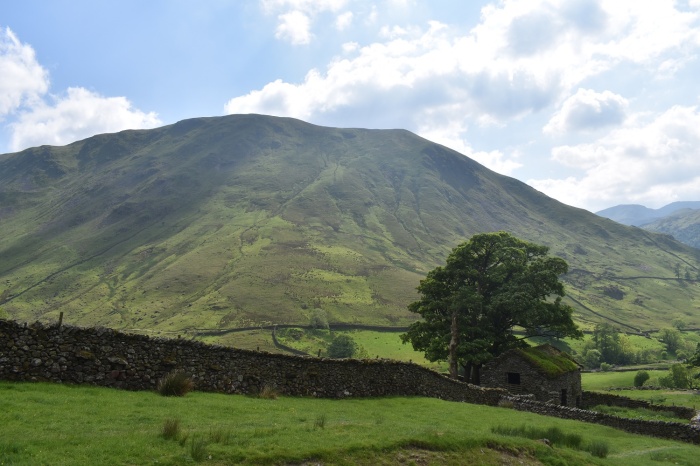 Hartsop Dodd beyond the well photographed tree and mossy barn. Seems ages ago I was up there and this angle gives a better idea of the gradient

A final shot of Pasture Bottom as I walk back to Hartsop, all lush and green, now for a pint