Back to Dartmoor for me. And a walk were I saw no one, not a soul all day apart from in the car park which was very strange but then again I don’t mind it that way. This walk takes in a lovely tor with some amazing views, some of the best from what isn’t one of the tor names that leap to mind when thinking about Dartmoor. Now was the time to do this one as well as the bracken is growing and the horrible stuff will soon be too high requiring visits to places that don’t have it! I also had a walk through Neadon Cleave which is a good spot for the bird watchers, a heard a Wood Warbler in there but never saw it! And the tors in there aren’t to bad either. But the highlight of this walk will always be Easdon Tor and Figgie Daniel such a lovely stretch of moorland. I was glad that I chose to stay mainly in woodland for the rest however as it was stiflingly hot in parts, with hardly any breeze, the River Bovey got a paddle from me at the Manaton Clapper bridges and it was much needed. 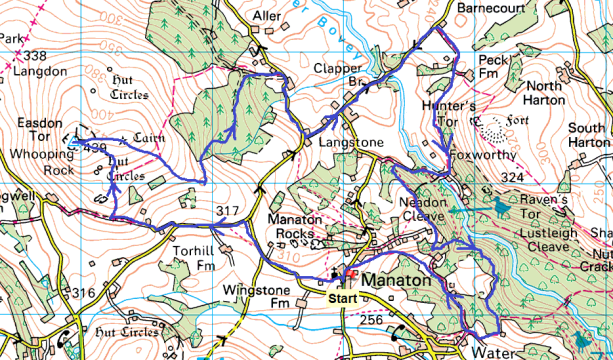 Hayne Down as I walk the roads around towards Easdon Tor. Bowermans Nose is on the right hand side of the Down 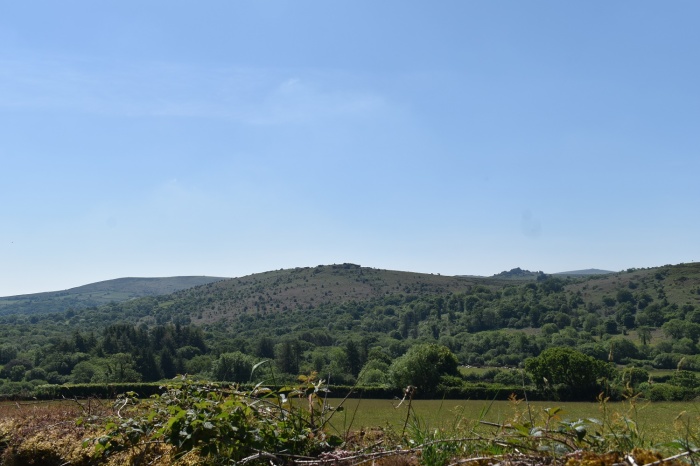 The tors to the south start to open up. Hound Tor is to the right of Hayne Down

I love the views up here, Easdon Tor summit with Cosdon Hill just right of the trig point

Haytor is furthest left at the back with Rippon Tor just right of that and further right is Honeybag and Chinkwell Tors. Furthest right is the start of Hameldown. That’s also Whooping Rock down there, the outcrop about 40 metres away

Along the Easdon Tor ridge towards Figgie Daniel

And there he is Figgie Daniel with Lustleigh Cleave behind it 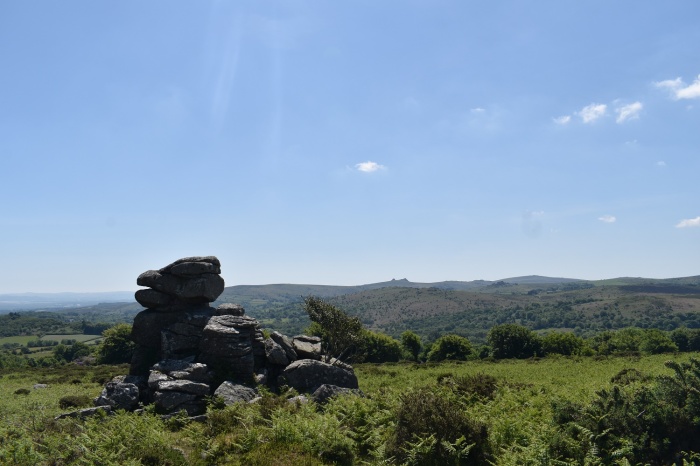 Figgie Daniel will Haytor in the distance, it was hot across here, the good news for me is I;m heading into more wooded areas soon

A great view across the rhododendrons to the high tors 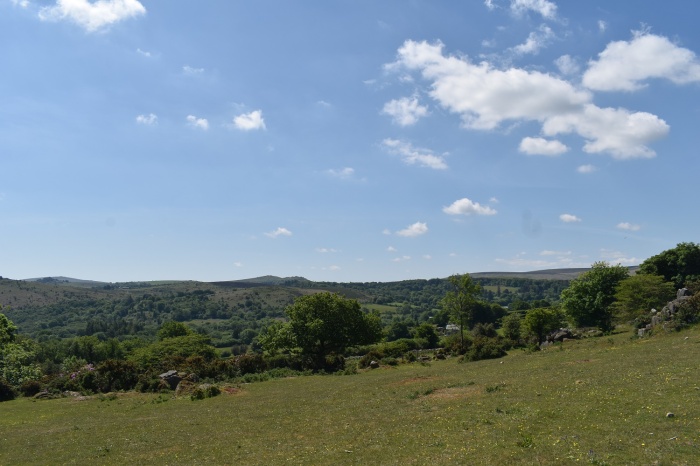 Brilliant views here as I head to Barracott Tor 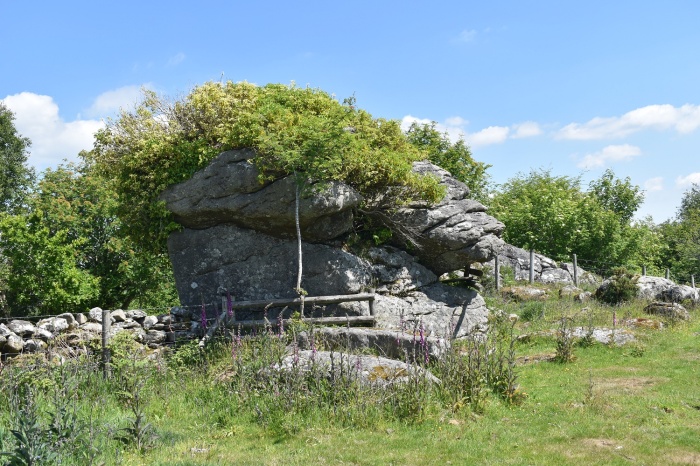 A here it is with a hat of greenery

On the road from Langstone to Manaton clapper I reach Neadon, from here there are views up to Hunters Tor and the Lustleigh ridge

Two bridges here, neither are a clapper bridge, I can only assume they once were. The first heads over the River Bovey and this smaller one is over a tributary stream 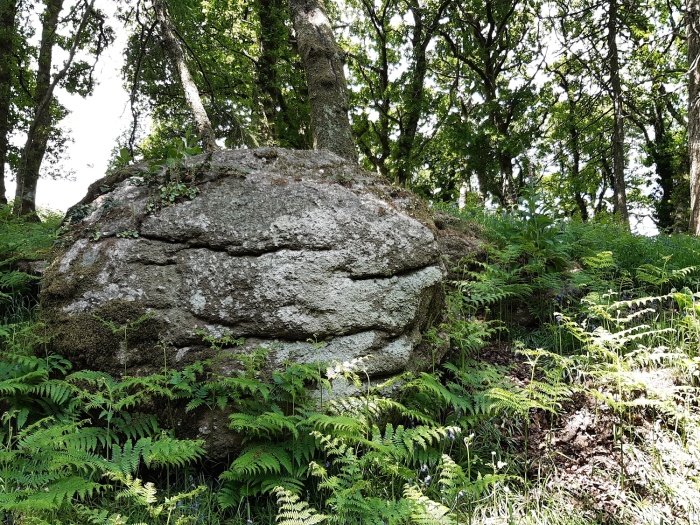 This was a rocky outcrop I could see from the road after the Manaton “clapper” bridges, there was an open gate so I had a quick peek in the woodland, plenty of unnamed outcrops at the top of a small hill in woodlands

Fantastic walking along here, the views were very good as the air clarity was pretty clear despite the heat

A squirrel, just got this shot on it on the branch before it jumped out of sight

Now this is a lovely place, Foxworthy Bridge, its a shame that either side of the road is private so you can’t get to the river, the private driveway stops you at this point and sends you into the woods before bringing you out further up. You feel like a trespasser here a bit!! 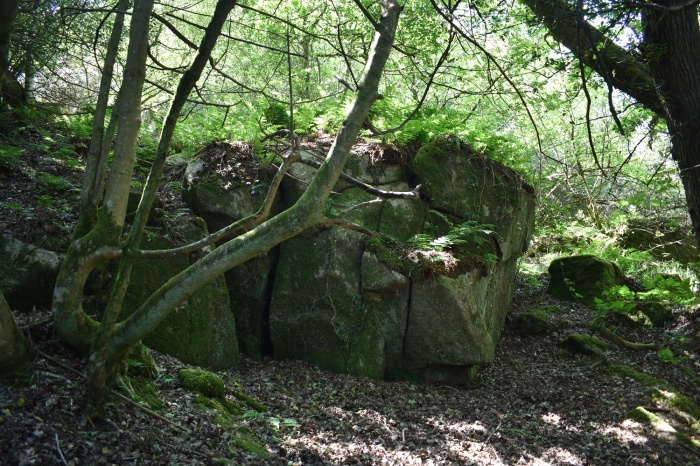 I headed into Neadon Cleave to look for some tors within. This one has the northern name due to it being furthest north which makes sense 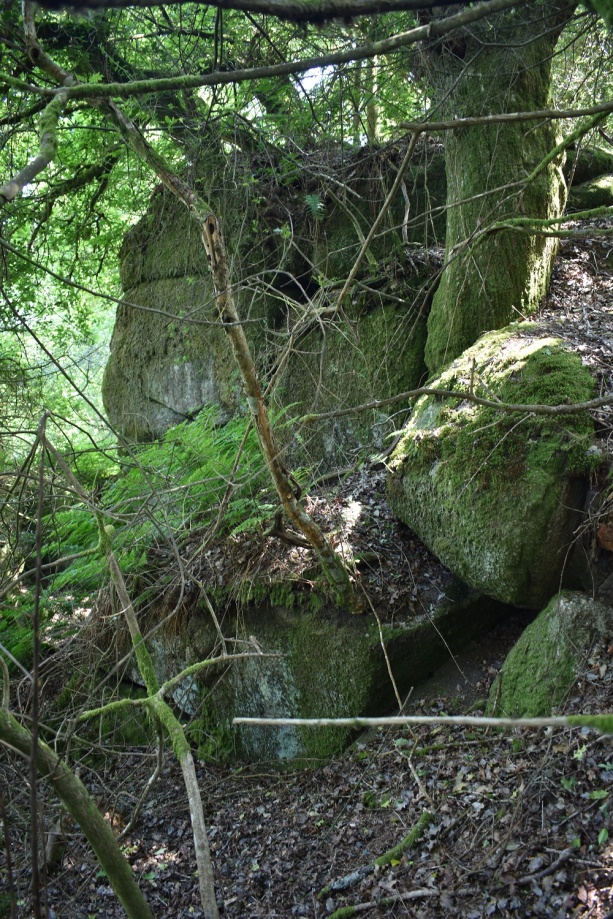 There are some pretty huge boulders and outcrops here as befits some of the woodland tors on the eastern side of Dartmoor. Neadon Cleave North Tor 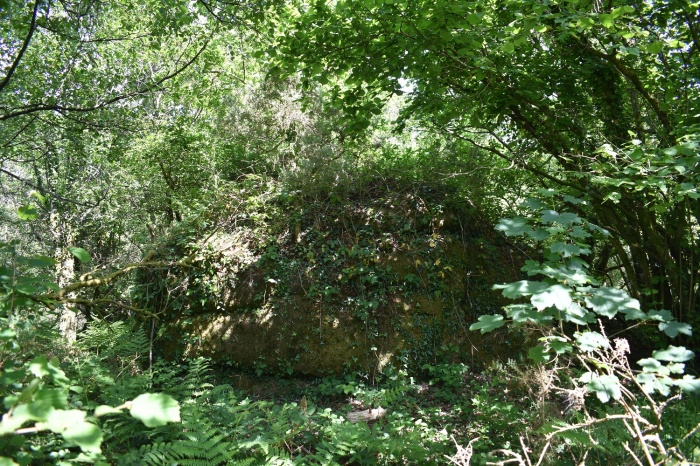 I’d joined the top path through Neadon Cleave which gives the best access to the north tor and then to this one. Neadon Cleave Summit Tor, this is a big old boulder with some littler ones behind it. It sits right by the path as it splits to head towards Manaton one way and the houses around Horsham the other.

After a stop and a drink I walked past the last houses classed as Horsham before dropping down and I headed through some long grass and found the path back down into Neadon Cleave. This took me past Neadon Cleave South Tor, this bit was right by the path, another huge rock was up to the right here, the other side of these trees, with more behind me in the trees above. The long grass I walked through would become more important a day or two later when I found a couple of ticks on me. They were easily removed and no adverse affects so far, but they aren’t half sneaky little buggers

Re entering Neadon Cleave meant I was on the path down towards Horsham Steps, I wasn’t heading that way as I wanted to keep going South East to Water Cleave Tor. This is the view as I got there, a quick glimpse across to Ravens’ Tor on the other side of the valley

This one has 3 big outcrops at least, a fine tor that would have looked brilliant before all the trees grew up 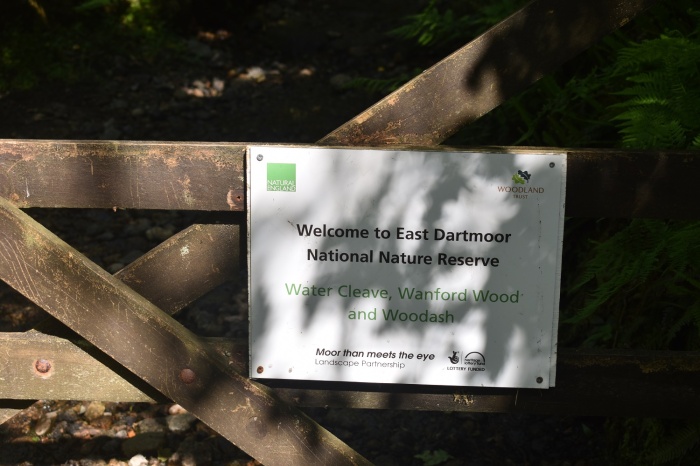 The lower part of Latchell Tor, right by the path, I’m heading that way back to Manaton 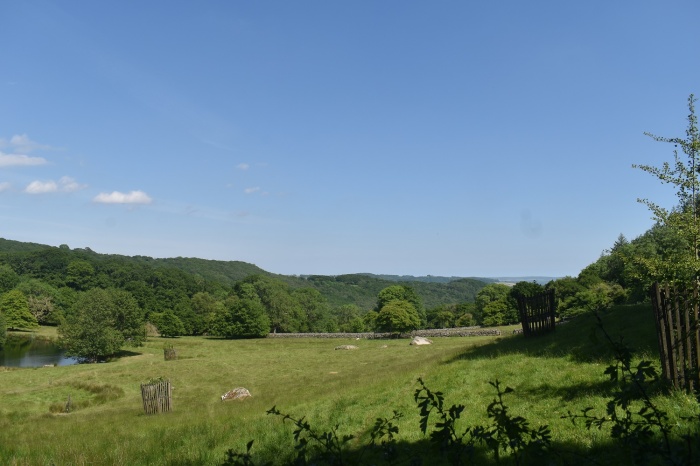 A fancy garden, with a pond as I look along Lustleigh Cleave

Its not no entry to me as mine are in there, I’m sure!! 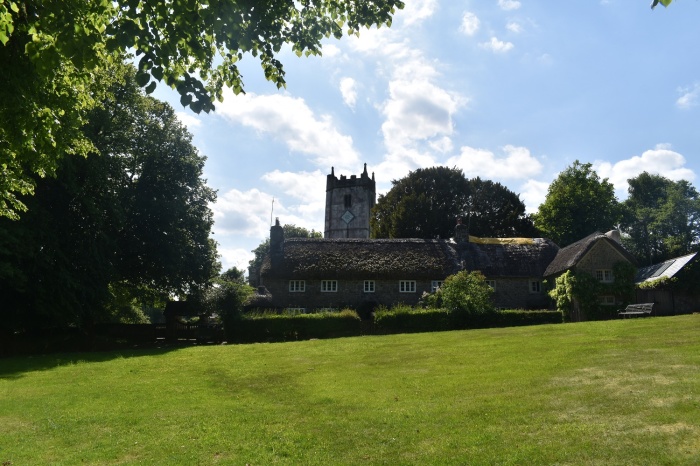 Back at Manaton, a fine walk around Dartmoor and two in a row now!!