As promised, not as long until my next big walk and this one is a bit of a change in locations for myself, especially the outward route. After a dry summer I decided to have a go at looking for Rugglestone Rock, plus a number of outcrops on the side of Hameldown. These all seemed to fit into the same walk, so off I went. The area around Rugglestone is very boggy, however on leaving the outcrop I’ve found a better way which I will use in the future. After stooping in Widecombe for a break and some cold drinks, it was pretty warm for mid-September, I forgot to take the second road up on leaving the village, instead taking the first path! Never mind it was just a longer loop around to Wooder Goyle Rocks, from there it was on to Old House Rocks, this is slightly uphill from Wooder Goyle and through the bracken it became hard work. From this point I had a choice, a beeline for Natsworthy Gate or the more obvious route following the improving path. I chose the latter and enjoyed probably the best part of the walk on the side of Hameldown. On reaching the base of Honeybag Tor, I opted not to climb it instead I followed the good track below it and Chinkwell Tor, before arriving at Bell Tor and then Bonehill Rocks, looking resplendent in the warm sunshine. All that was left was a quick walk across Blackslade Down and back to the car. A walk that promised much and delivered in ways that I was not expecting. It would be easy to extend this walk up to Hameldown Tor, Grimspound and as mentioned Honeybag and Chinkwell Tors. I’m already planning the next outing and hoping to keep the momentum of walks going!!

Starting out I cross this bridge and follow the road out of shot to the left, at the end of the walk I would find myself lay down in this stream!!

The views to the south across Buckland in the Moor 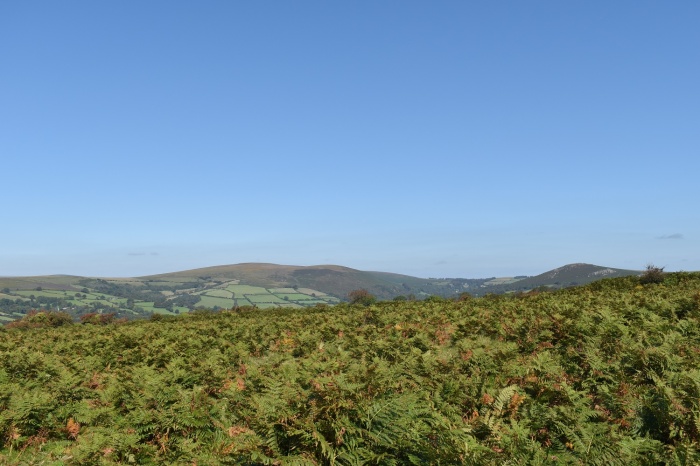 Crossing Pudsham Down with Hameldown in the centre, it looks a long way from here but if you walk pretty much at it, you will get up there in 90 minutes easily. 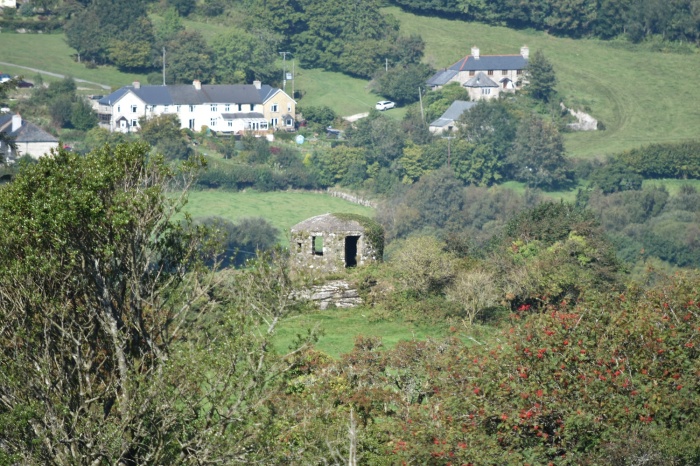 I crossed Pudsham Down to get a good view of this. The folly on Scorbitor, and this is pretty much the nearest and best view of it. I went nearer but the scrub, hawthorn and sloe bushes kept me from getting a clear view.

The road to Widecombe, however I’m stopping off on my immediate right, and Blackslade Rock. Hameldown again in the distance 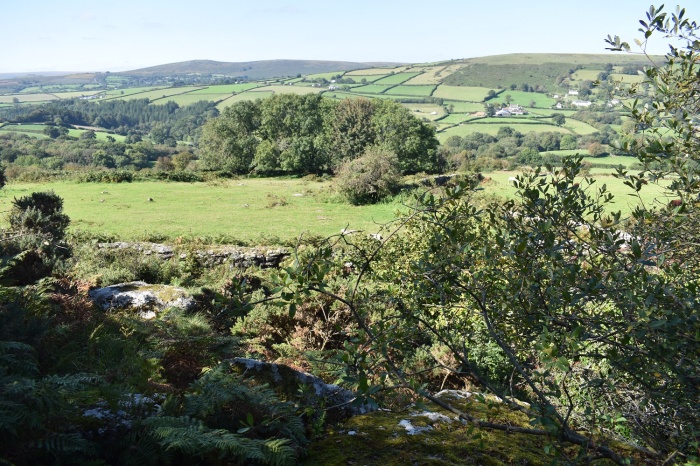 The view from Blackslade Rock. It was a right faff getting up here with hawthorn again barring my progress. In the end I went up to the gate and around the back for a quicker route. Corndon Tor is in the distance. 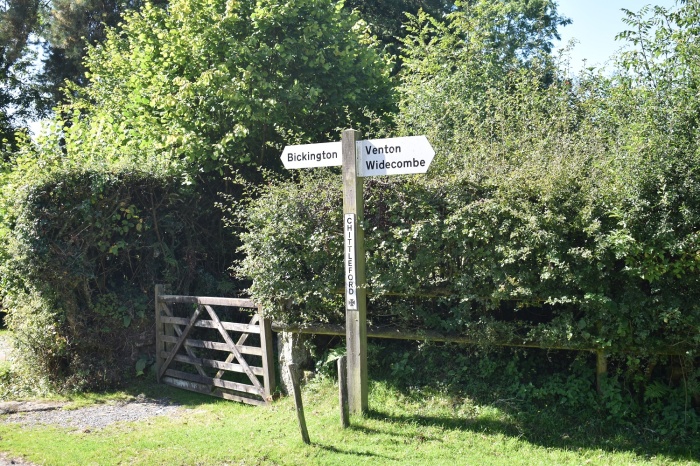 On reaching Venton, you head up a path to the east, this brings you out on the moor and into a boggy area, you head north and then north west ish to get to Rugglestone Rock. I reckon this is how lots of people get here (or they come down from Hollow Tor above). This is a bit too boggy for easy access and with the bracken it makes for tough walking. The trees and bushes don’t help at this time of year, however I had the GPS and knew where to search, 15 minutes later I had this spot and Rugglestone Rock

Its not small, at least the size of a large transit van. On leaving I handrailed the wall to the north of the rock and found a drier and eventually a path’d exit to this outcrop

Popping out of the gorse, hawthorn, sloe and bracken I reached this gravelly driveway ( it leads to a house but is public access at this point). Chinkwell Tor in the distance.

A welcome sight of Widecombe church, I sat under that tree on the left and had a bite to eat and something to drink. It was pretty warm at 1pm (as per the clock). I then headed into the Shop on the Green for some colder drinks to cool off some more. I was ready for the climb to Hameldown!

At this point I realised that I’d gone up the wrong road, I should have been beside those darker trees on the hillside on the left, following the second road out of Widecombe. I’d followed my normal route up this road and I stopped at this gate as I always do to take a picture of Chinkwell Tor with Honeybag Tor behind

On reaching the moor proper I turn to take this photo to Haytor back left, Top Tor with Rippon Tor behind that and Widecombe below. A lovely sight of green fields everywhere and the wriggling road down to Widecombe

At this point the views to the west unveil themselves. In the centre is Soussons forest, with back right Assycombe Hill, with Fernworthy Forest atop that. The only other feature which is obvious is the slight hump of Cut Hill (centre left), where I was last week. 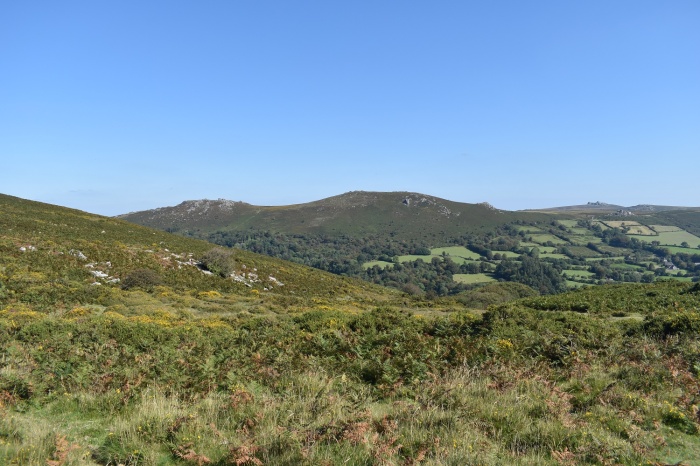 Part of Wooder Goyle Rocks on the left, but the image is dominated by Chinkwell Tor and Honeybag Tor across the valley, with Haytor on the right at the back

The larger rocks of Wooder Goyle are on the edge of the ravine as it runs down the hill. Again that view beyond.

Looking south east ish out of the valley. With Wooder Goyle Rocks on the ravine side in the foreground

After a bit a up and around I reached Old House Rocks, if I’m honest it would be better to go from these rocks to Wooder Goyle as it would be mostly downhill. Going uphill off path isn’t fun and makes for a tougher walk than need be. 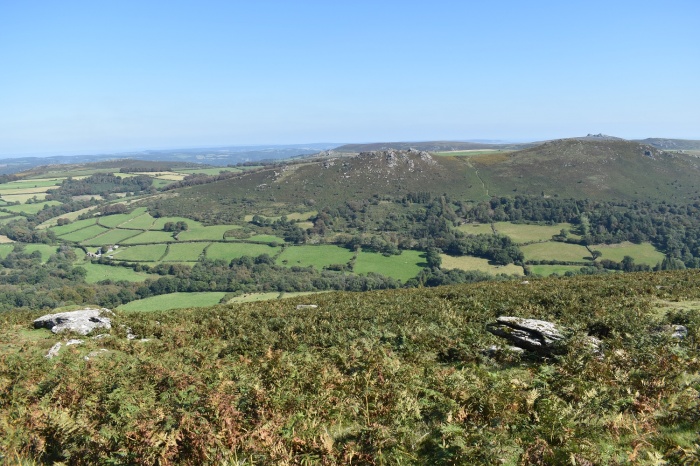 Old House Rocks looking across to Honeybag Tor on the left and Chinkwell Tor right.

I’m contouring around Hameldown here to avoid a steep down off Old House Rocks and then steep up back to the path. I really enjoyed this section as there was a breeze and fine views to the north east across Easdon Tor

Having contoured around, that is the hill holding Old House Rocks on the right, with the back of Honeybag Tor and Chinkwell Tor to the left. Haytor is now to the left of those two. 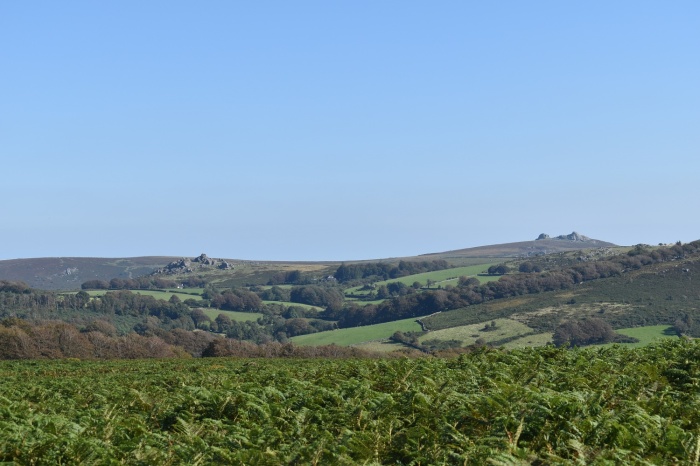 Approaching Natsworthy Gate and zooming in a bit on Hound Tor left and Haytor right. These two are probably the most popular tors on the moor, and for me a visit in the early or late hours is best to get the most from these places. 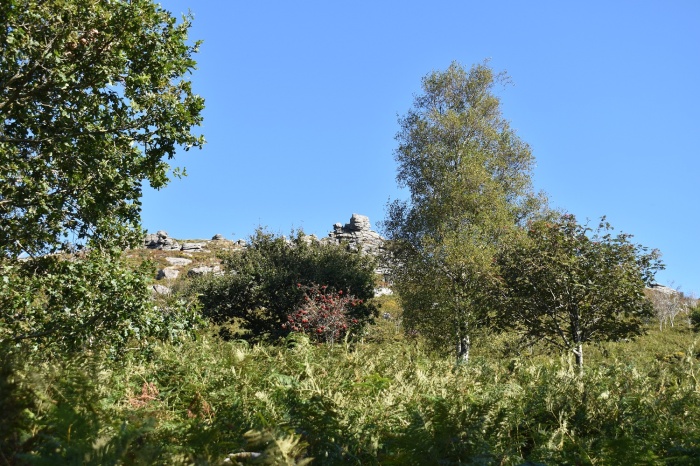 On the path below Honeybag Tor, I chose this route as I was pretty tired by this point and wanted to stay out of the very warm sun as much as possible, the trees line the south and west side of this path, which helps. I knew that from Bell Tor onwards would be in very little shade at all

I’m on the other side of the valley now. Widecombe again is below.

I walked straight past Bonehill due to the amount of people on its rocks. Here I look back to Bonehill, then Bell Tor and finally up and back to Chinkwell Tor

Heading across Blackslade Down now, up to Top Tor. Looking over to Haytor, with Saddle Tor to the right 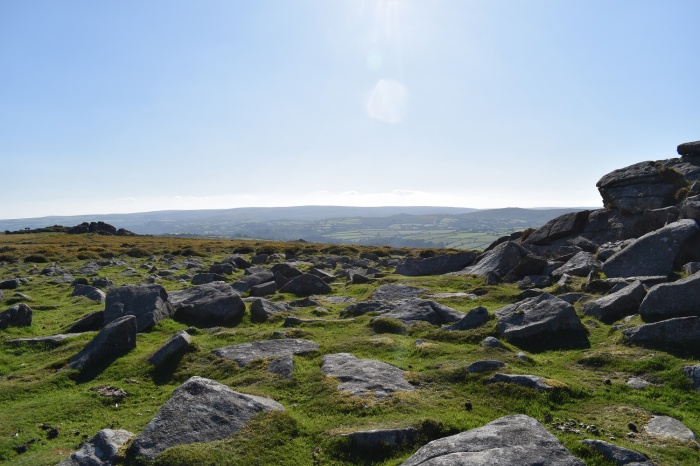 Top Tor with Pil Tor tot he left. For most of this walk the sun had a glare about it, affecting most of the photos, even with the correct lens on. Everything seemed to shine, rocks, grass, bracken, gorse, by the end I was shining also!! 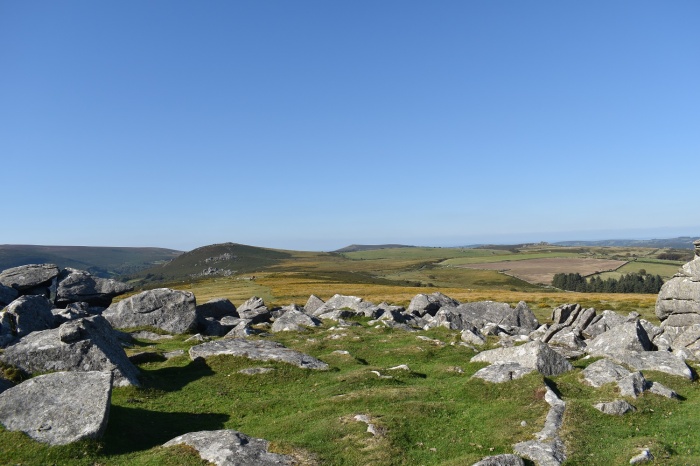 Looking back to Chinkwell Tor from Top Tor

Looking down from Pil Tor to Tunhill Rocks, not today however. In the distance is the southern moor and Corndon Tor 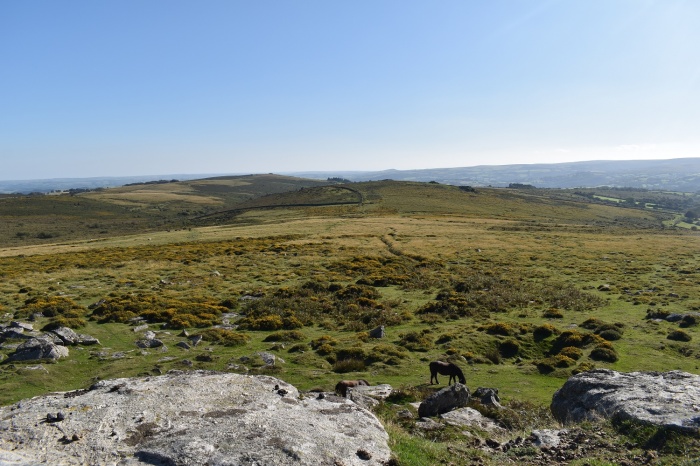 Last shot from Pil Tor of the direction I would be heading. That’s Wittaburrow to the right of the wall, again not today for me, I’m following the wall down to the left

Down by the wall now and looking up to Rippon Tor 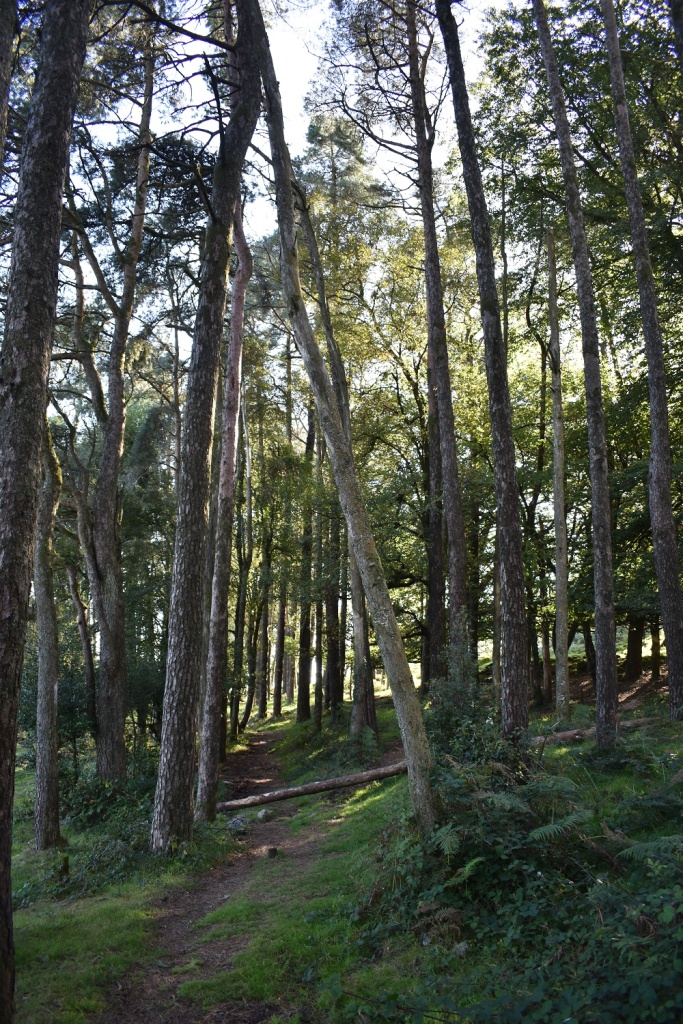 The last section is through these trees to the bridge on photo number one, which is 20 metres from the car. At this point I was pretty warm so a quick dip was needed to cool off at the end of another fine walk.