It had been a while, The last decent walk I did was Helvellyn and that was more than a month ago. Decorating, gardening and work had got in the way too much, well enough was enough and this walk was planned. Initially I only wanted to go as far as Kit Rocks, then across to Sittaford and back past Stannon Farm to Postbridge. However as I was walking the walk evolved a bit, I added Cut Hill in, after consulting the map and deciding that I could stay out of the Merrivale Firing range (where firing was happening and red flags flying) and follow Cut Hill stream up to the hill. i also added on the Starch Factory and Hartland Tor at the end in order to finish without a short road walk back to the car. The weather was pretty good to start and got better as the walk went on. I have to admit that the areas around Kit Rocks, Cut Hill stream and Winney’s Down aren’t exactly dry. Even now after a dry summer they are returning to their usual boggy state, with very little in the way of paths to help the weary walker, I was off piste for a few miles in the middle of the walk, but that adds to the fun of these parts of the moor and it keeps you on your toes. The other part to this walk was to reach Hemstone Rocks, within Fernworthy Forest, they were on my list to bag so I figured I could grab these on this walk. Don’t bother, in fact I’ve removed them from my list and added White Ridge Tor instead which is a far better place to be. Hemstone Rocks will interest those who like a bit of conifer forest, with rocks covered in greenery, moss, and lychen. Not for me. White Ridge however is a great outcrop (or two) and affords a good spot for a brew to enjoy the vista. After such a wait this was a great a walk and it won’t be anywhere near as long until the next decent walk, that’s for sure. 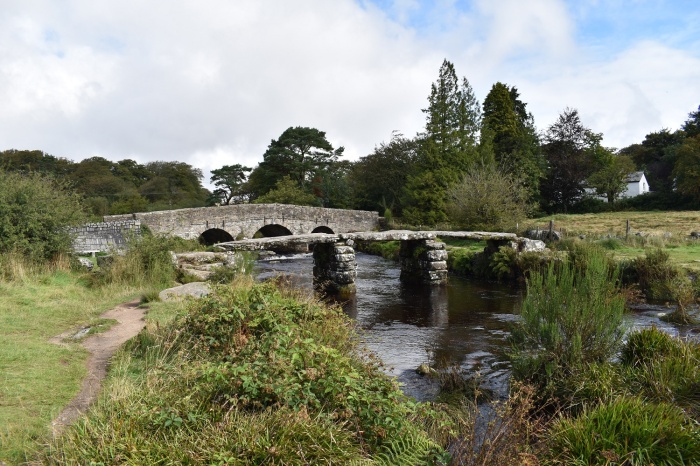 Lots of photos on this walk as there was plenty to see and it was 12 miles. Starting out at the classic Postbridge Clapper Bridge 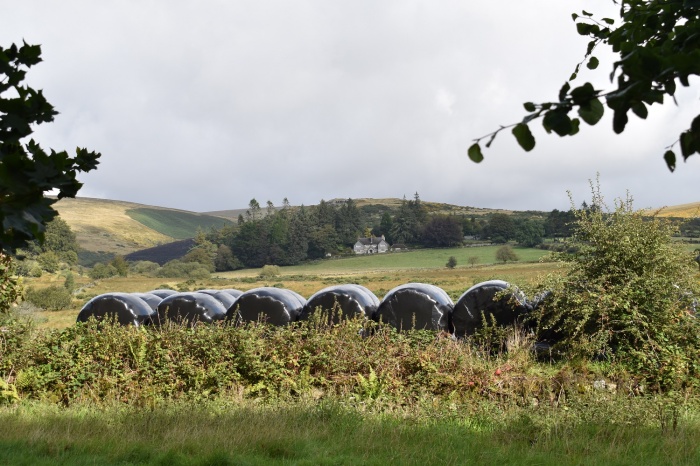 At this point I didn’t know the tor behind the house and tress was to be my last one of the day. However Hartland Tor finished off the day nicely and by the time I got there the skies would be blue and the sun shining. P.S I want that house!!

Away in the distance is a small section of Fernworthy Forest, in about 5 hours or so I would be in there.

The gate out on to the moor proper. Broad Down up on the left and Hartland Tor to the right of the dip which holds the East Dart river 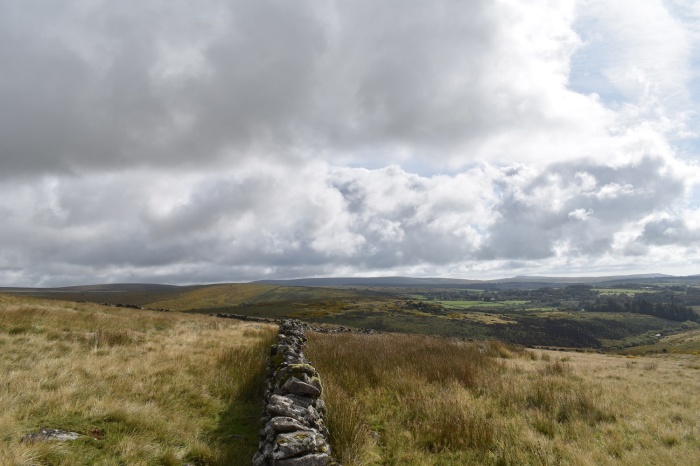 Looking back towards Postbridge. The wrinkles in the distance are Corndon and Yar Tors

Follow the wall to get to Broadown Tor, with Higher White Tor to the left 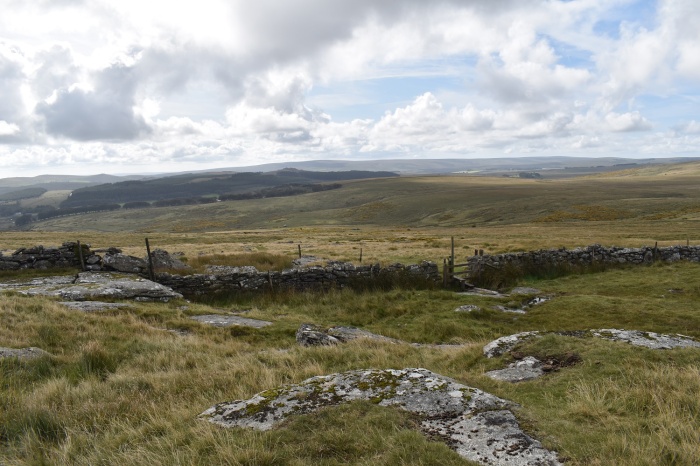 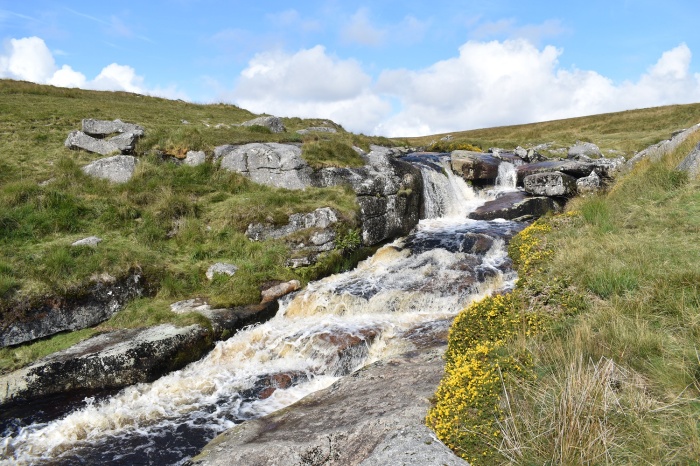 We’d had one good day of rain before this walk and the rivers and streams where all up. The water was brown and carrying sediment and this was as high as I’d ever seen the East Dart 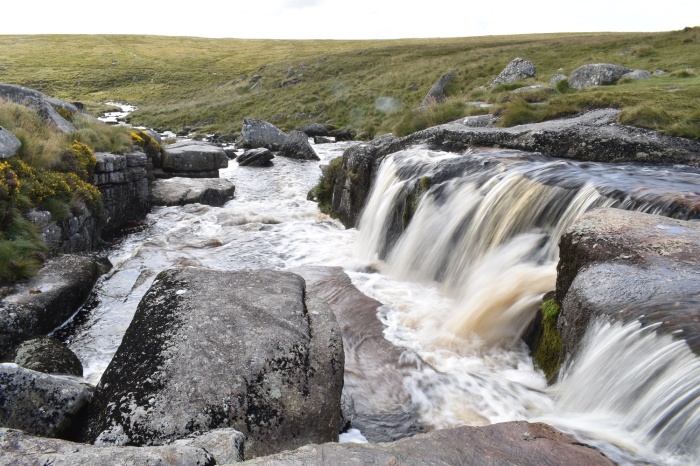 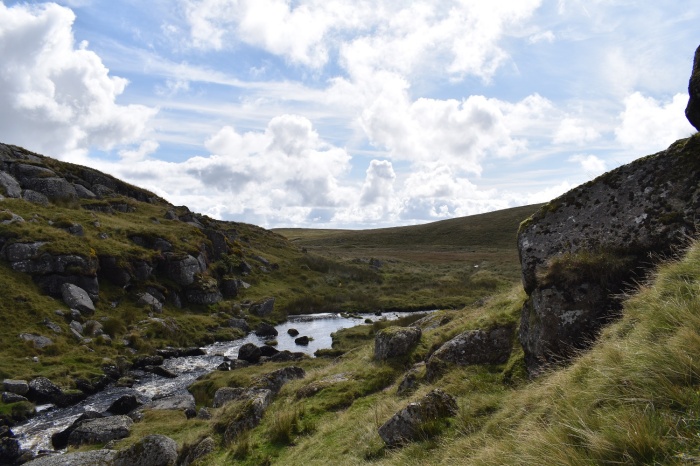 Looking back out from Sandy Hole Rocks 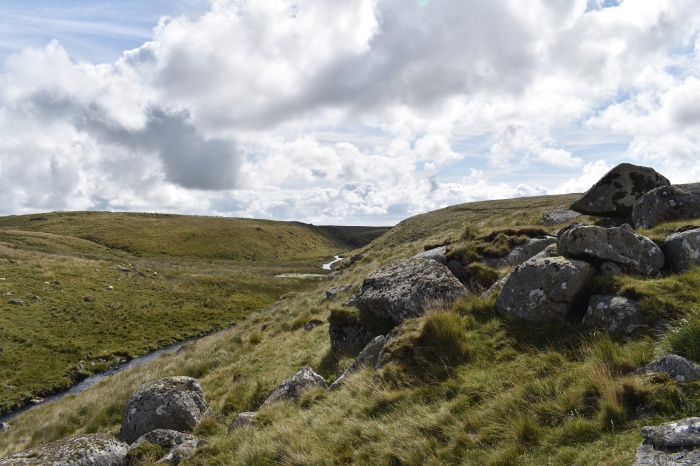 Turning the other way. Cut Hill looks dark up on the left and Broad Marsh is to the right of the river, not to be messed with. 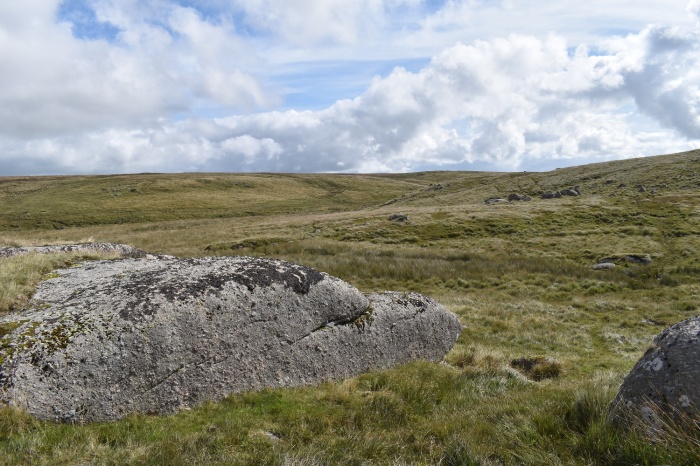 Broada Stones now, from here I could see the red flags flying on Rough Tor behind me. Here I look back to Sandy Hole Rocks (north) and my exit from the Sandy Hole Pass 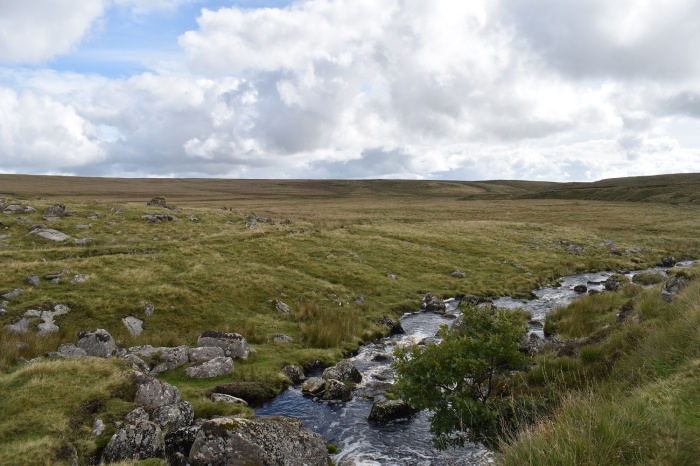 I’m at Kit Steps now and over a brew I decide that Cut Hill is on the menu and I need to follow Cut Hill Stream north a bit and then head off piste to catch the peat pass up to the summit. On this photo Broad Marsh is the flat area stretching across the middle of the photo. I’ve been waist deep in there before!

Climbing Cut Hill, or more contouring around to the peat pass and looking back from where I’ve been. The dip in the centre is Sandy Hole Pass

There’s two river heads in the foreground of this photo, and another place not to mess with. The pointy tor dead centre is Longaford Tor, with Rough Tor to the right

Here we go, a decent path now up to Cut Hill

It was pretty good, not as good as the one off to the east of Whitehorse Hill, but much better than bashing through long grass

Cut Hill summit area and looking across to Fur Tor which has a bit of sun just catching the edge of it. Hare Tor stand dark and proud beyond, with Great Links Tor back right 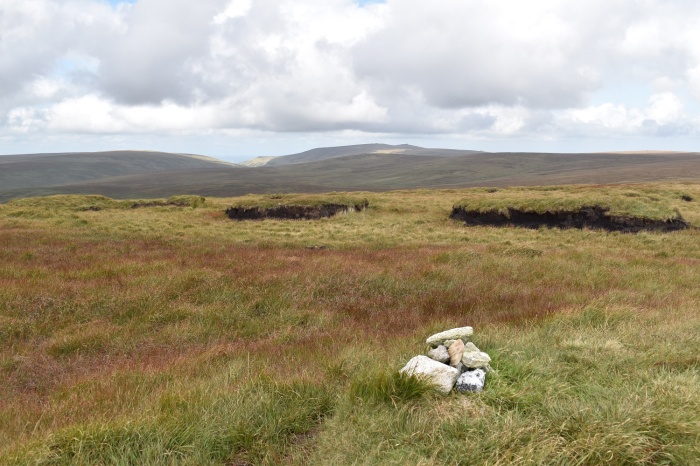 The balancing stone, held up by a peat stack

Cut Hill stream is below me. However I’m looking at how far away Fernworthy Forest looks from here, with Sittaford Tor to the right of that. Truth be told it was only an hour to Sittaford although the ground to get there was tough, lots of long grass, squelchy bog and very little paths. 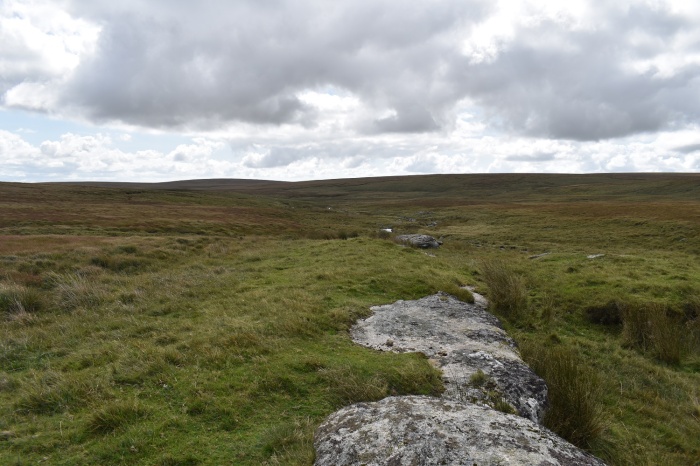 Some respite from the long grass at Kit Rocks, looking south along the East Dart 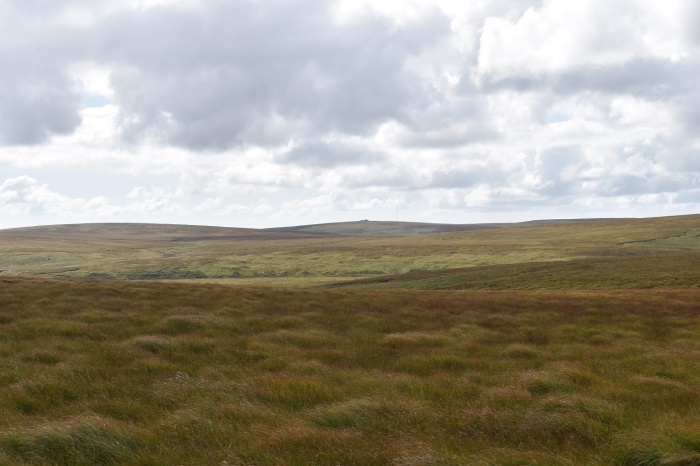 Rough Tor in the distance as I walk across an area of Winney’s Down which is in a straight line from Kit Rocks to Statts House. To be honest I did think twice about going across this part, it looks flat and therefore will be damp, but it looks as though this could be another area that they try to claim back as a bog to restore the peat to the area. I should really have headed down to Kit Steps and picked up the peat pass to Statts House 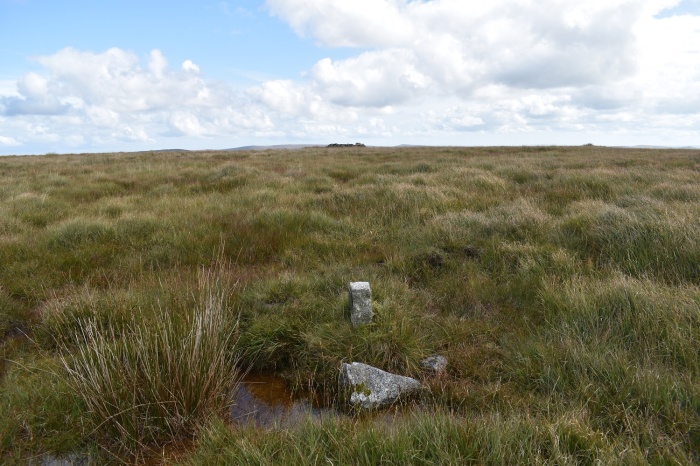 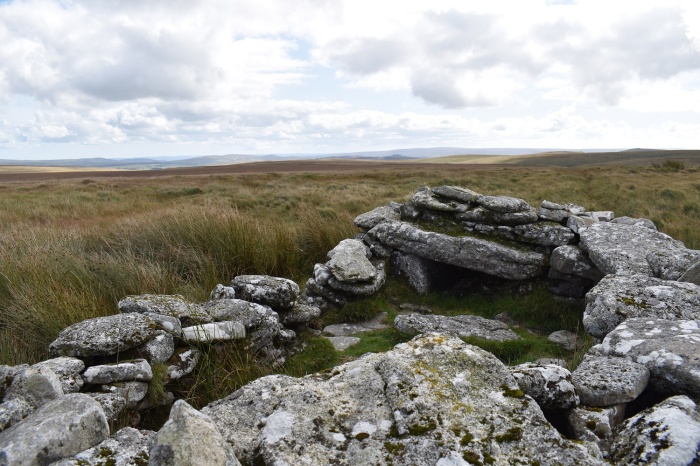 Statts House. The going from here to Sittaford is better with a clear grassy path 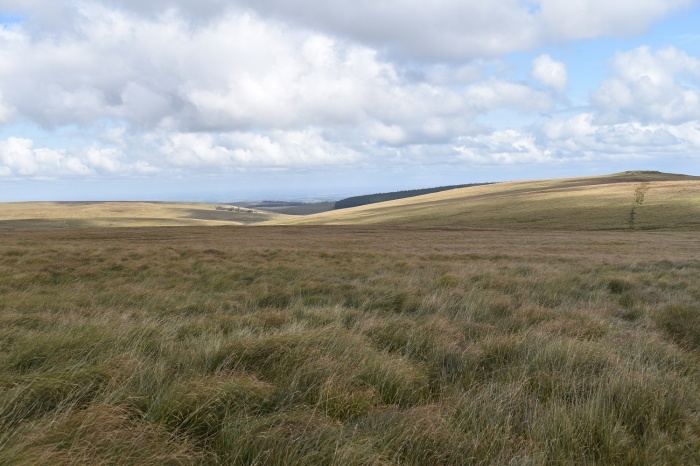 There’s the path to Sittaford on the right. To the left of the dip is a small clump of tress which holds Teignhead Farm, a fine wild camp spot

Sittaford Stone circle, looking back across to Cut Hill 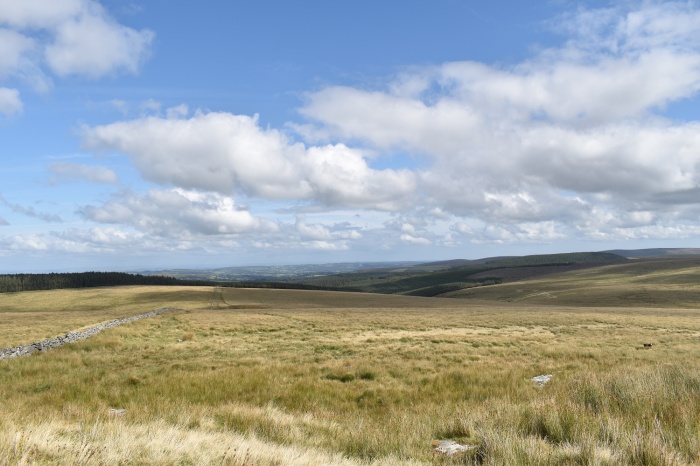 Follow the wall downhill to reach Grey Wethers which is my next stop off point. Nearing Fernworthy Forest now as well 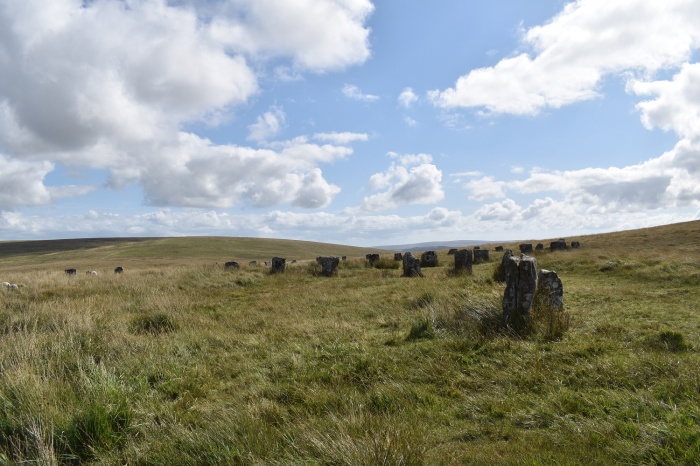 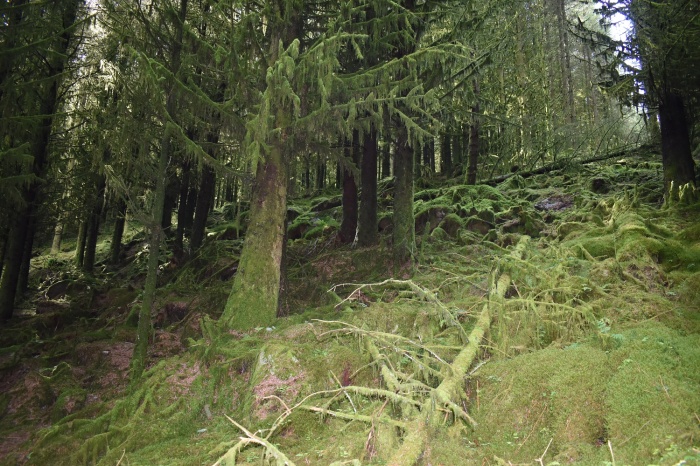 After dropping down and entering Fernworthy Forest I followed a track to a point which Held Hemstone Rocks. the idea being that I bagged the outcrop. Well its not for me, I climbed through trees to this spot to find a mossy covered group of rocks, the terrain underfoot was ankle breaking so i retreated and decided to remove it from my list. However I had a plan and it wouldn’t take more than 30 minutes to sort it.

This is White Ridge Tor, the new entrant to my list. I’ve actually been here once before, many moons ago but paid little attention to it as I was heading from Grey Wethers. That’s Stannon Tor down there and a vista for miles to the south

Plenty of gorse flowing on the slopes of Metheral Hill. Hameldown over to the left

There are a couple of outcrops here making up this tor, this lower one gives great views to the East Dart river as it wriggles away from the east Dart Waterfall. Higher White Tor back left

On Stannon Tor now and plenty of cows around keeping me on my toes. The sun has brought a fine end to this walk 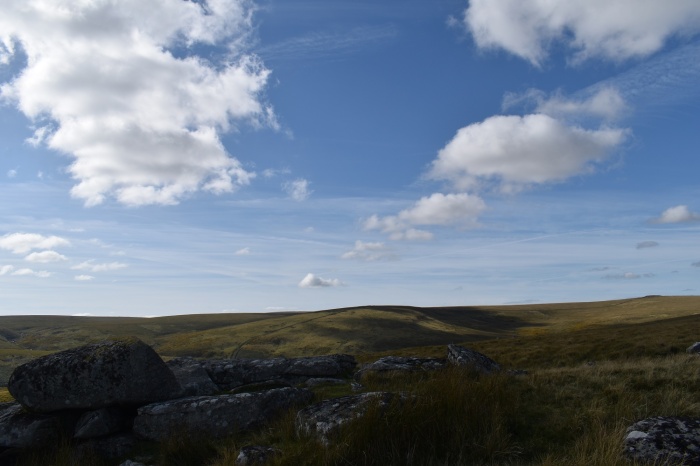 Marked on the map as the Sheepfold, which to me looks to be the scruffy walled part on this side of the huge walled structure, which for me was the Starch Factory

Inside the Starch Factory

Gorse everywhere around the Starch Factory with Stannon Tor above

Hartland Tor is the final one for the day, it wasn’t on the original itinerary however 1/4 mile on a road after 12 miles would have been purgatory so I headed for this tor from Stannon Tor to mean a grassy finish to the walk. Sittaford Tor looks a long way from here, infact lots of places on this walk have seemed to be a long way away, but then again it was 12miles all around. 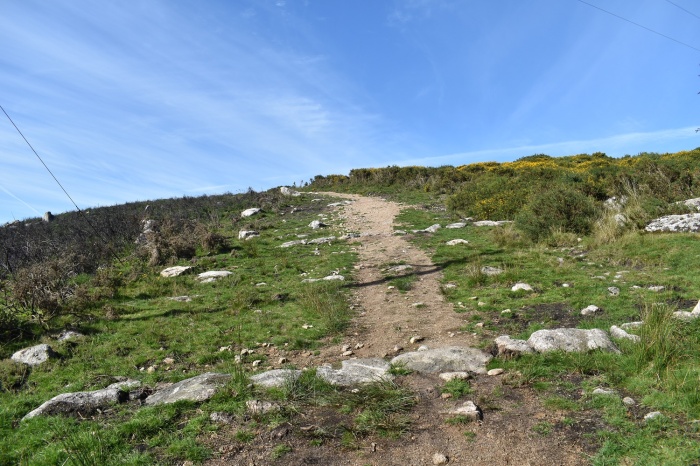 Coming down off Hartland Tor I saw this pathetic attempt to repair a path. Fine sandy coloured gravel is not what is needed here. Yes the stone cross channels are good to channel the water away, but in winter this gets wet and runs with water and that gravel is destined for the East Dart to my left. I’d seen this gravel used on my outward leg from the Dartmoor Park car park at Postbridge, on a flat path beside the river, which is fine. On this slope it is not and its a waste of money and materials. Whoever did this needs to be sent forthwith to the Lake District, Scotland or Snowdonia to work with proper rangers and Fix the Fell experts to learn how to construct a path 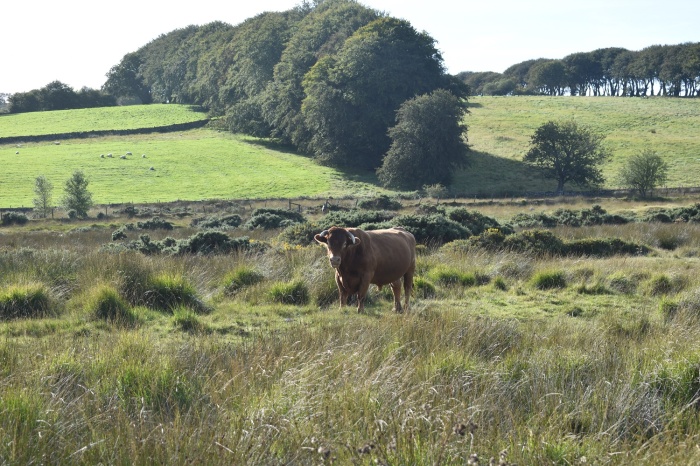 I was daydreaming walking across the fields back to Postbridge and nearly walked into this fellow, good job he was placid! 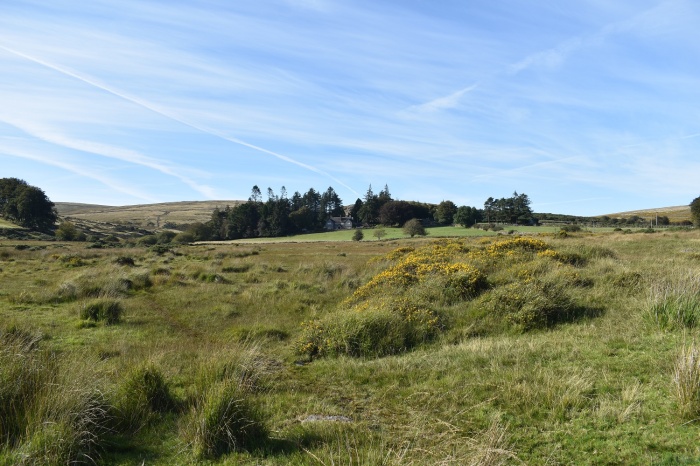 Back at the start with some gorgeous weather to finish