This walk has taken a bit of time to write up. The main reason being that I’ve extended my list of Dartmoor tors, from 400 to 500, and in doing so this meant finding another 100 tors to include. Now looking at the many tors lists that are out there, I was missing lots of tors within woodlands on the eastern side of Dartmoor, there was the odd one here and there around the periphery of the rest of Dartmoor, but I had batches of tors in the east within woodland such as Wray Cleave, Castor, Shaptor, Bearacleave, Whiddon and Neadon. Once I’d got the lists sorted and on this site, I could then start planning some routes. This is my first of these walks, now this isn’t my first time into this area, far from it. I’ve been twice into Shaptor Wood already, however Castor Woods was new to me and Bullaton Rock was unclaimed on my old list. The thing to realise about the eastern side of Dartmoor is that it is nothing like Dartmoor proper, there are no rolling hills, no military firing areas and less in the way of expansive views and less boggy areas. Walking within the woodlands can be tough as the tors are usually off a path, and it can feel like you are only there to bag the tor and it feels less like a walk. That’s why I will tend to walk in from a distance away to give a there and return element to these walks, whilst heading into woodland to bag the tors. However these tors can be just as big, some are huge and when you do get a view, its usually a cracker. There will be a fair bit of road walking in this area also, however that can be nice as they wind through the countryside taking you from woodland to down and then to to a large outcrop or rock. I’m looking forward to varying my walks in this way, interspersing these with normal moorland walks.

As for this walk, well I started at Kennick reservoir, and headed through the woodlands there, picking up a few tors along the way before heading down past Bullaton Farm and into Castor Woods. I got a bit confused in this woodland and in my haste to pick off Higher Castor, I missed Great Warmpit Copse and the tor of that name. So I’ll have to return! One bonus was walking through that wood I found a route to Bell Lane which saved a fair bit of walking and time, and meant I got into Shaptor Woods a little quicker, once in there it was a case of picking off the tors and looking at the map below I was a bit back and forth. Once leaving the woods it was a case of a long road walk back to Trenchford and then around to Kennick reservoir and the car. Being the day before the general election it was a short day for light and on driving home at 4.30 I got a great photo of a rising moon over the reservoir. A good first go at this type of walk for me. Now planning for more. 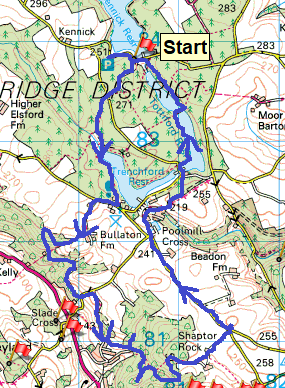 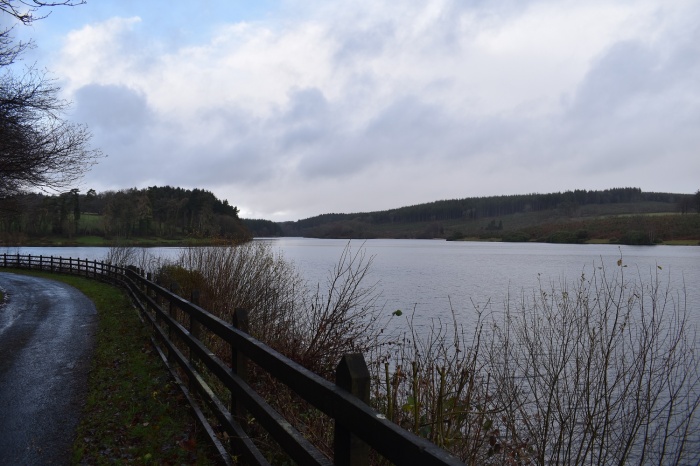 Kennick reservoir, I’m heading the wrong way for this walk, but Slade Rocks is just on the left around this corner, so I’m heading there first before picking up the path through the woods behind me

Slade Rocks in the trees

Now on the path heading down towards Trenchford reservoir. There are 3 reservoirs here, all linked by dams with water falling from one to the other. Kennick the highest and Trenchford the lowest. You’ll see Tottiford at the end of the walk. 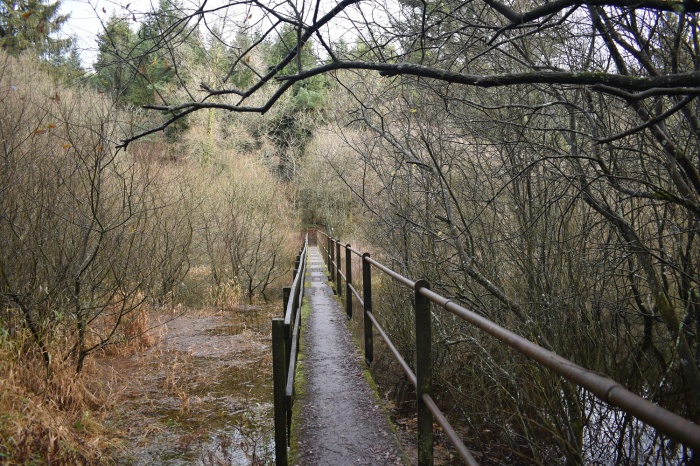 I did a bit of a loop around first just to have a look around, this is the bridge over this end of the reservoir. Trenchford Tor is dead ahead in the trees at the end of the bridge 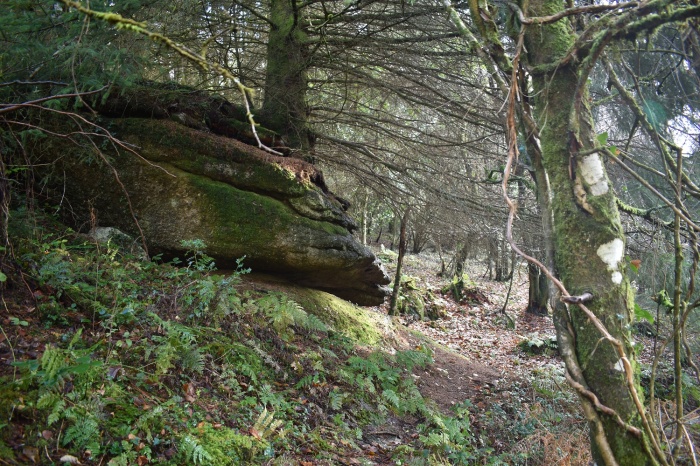 Trenchford Tor, or part of it anyway

Another part, lots of big boulders in here 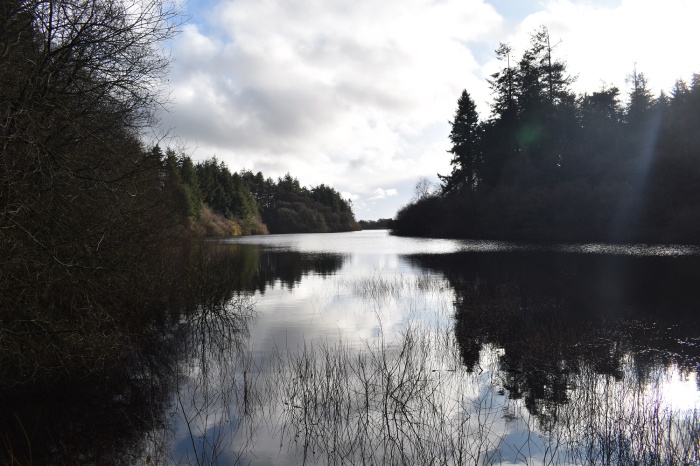 Nice spot for an early coffee, don’t mind if I do 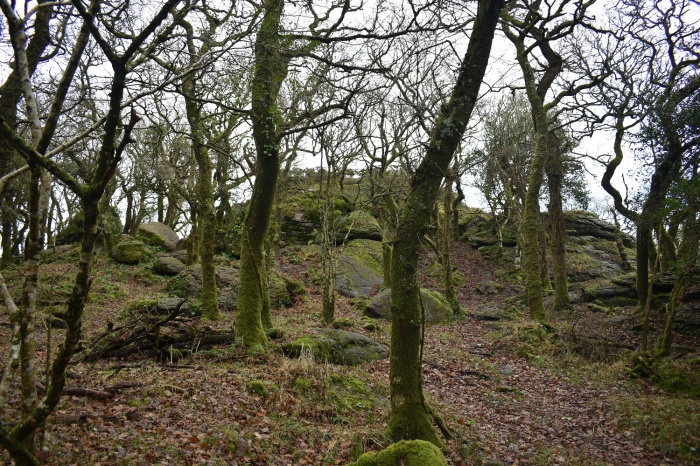 After passing Bullaton Farm and hopping a fence I ended up here, there’s a gate to the left of this photo which gives access to the top of this rock 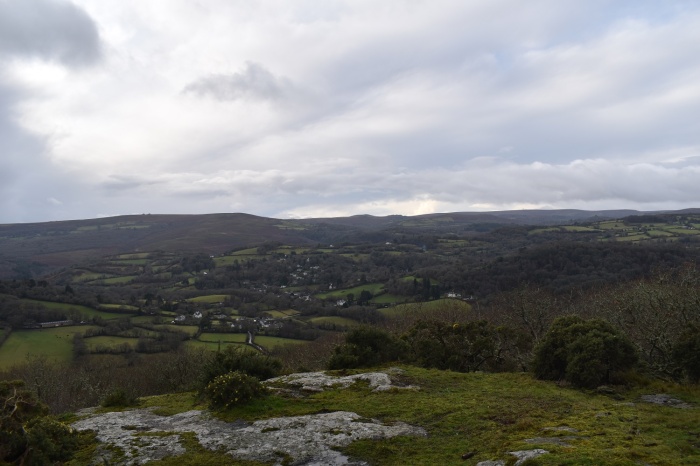 The view from Bullaton Rock. Black Hill on the left 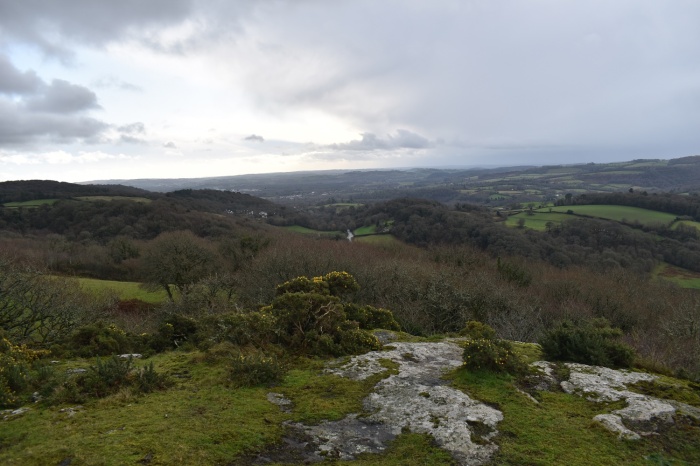 And south to Bovey Tracey. Shaptor Woods is on the left of photo. And the A382 is below, dead centre

This outcrop is above the Kelly Mine reservoir and before you cross the fence again, but its so close to the main Kelly Mine Tor that it must be part of it also

The Kelly Mine reservoir, you can see the pipe between the wooden posts beyond. The main path up through these woods is just to my left 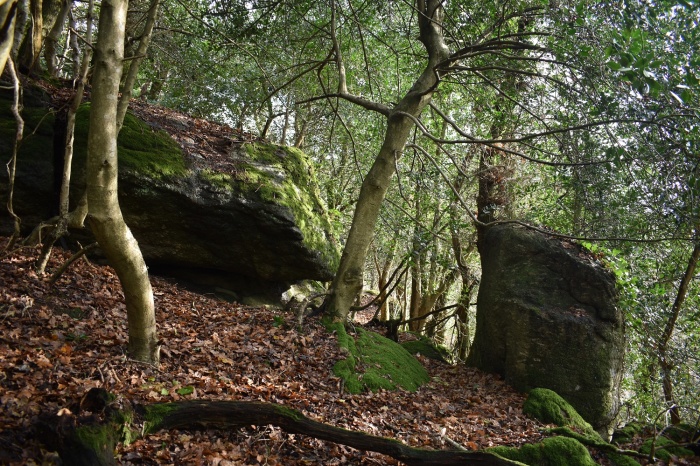 Kelly Mine Tor, this is the other side of the path now in Castor Woods 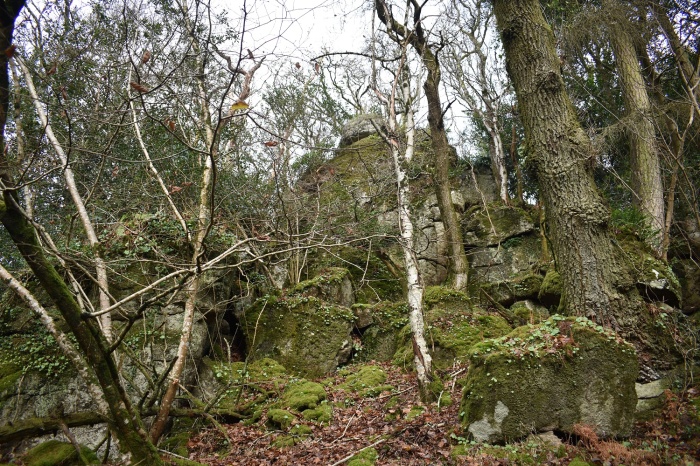 I was heading I thought towards Great Warmpit Copse Tor, but was too far north so missed it and hit the lower parts of Little Castor. In my haste then to get to Higher Castor I left Great Warmpit for another time.

The lower parts of Higher Castor, you can stand on this outcrop and get the same view I had at the top on the photo above. There are also more huge boulders above this outcrop, making it a large tor

Only a hundred metres or so down from the last photo is Lower Castor. The fence separates the outcrop, but can easily be walked around by descending behind me here and passing through were the fence has fallen 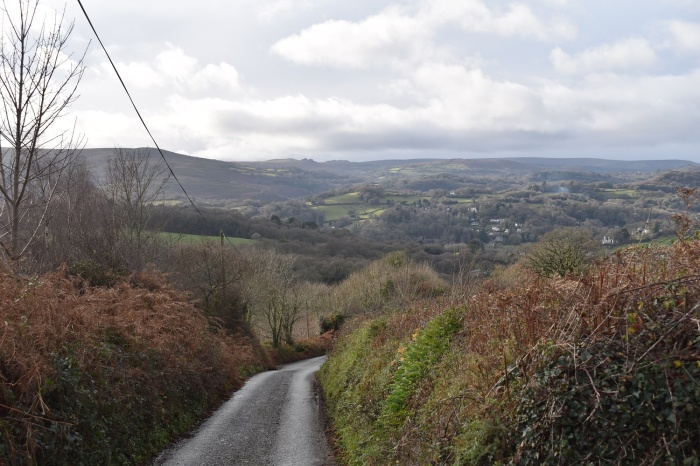 I headed the way the fence had fallen and carried on in that direction as I wanted to get to Bell Lane. By heading around a new build property/barn but still in the woods I dropped out of Castor Woods onto the lane on an S bend. All that was needed was a 100 metre upward walk. Here I look back down Bell Lane towards Hound Tor and Black Hill

Now walking in the direction of Shaptor Woods, I first find Gladstone Rock 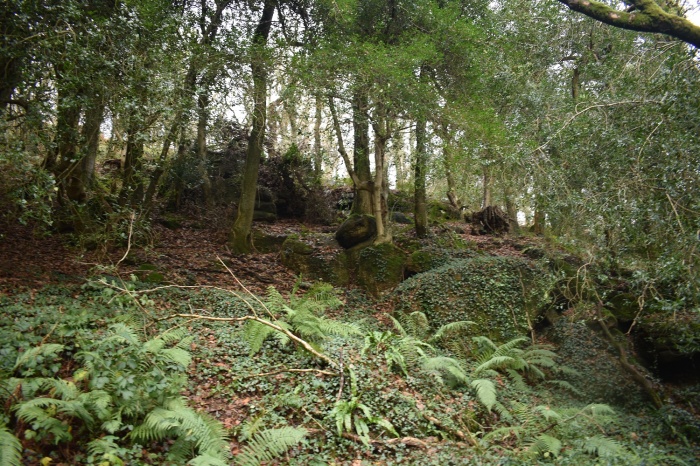 Carrying on I pass the new build houses in Hawkmoor to reach the rocks of the same name. There is a path winding up to the left here so I headed that way.

After a few hundred metres and a split in the path (keep left) you can see a few rocks in the trees, if you investigate you will come to this lovely little spot. Time for brew number two. That’s Shaptor Woods over there 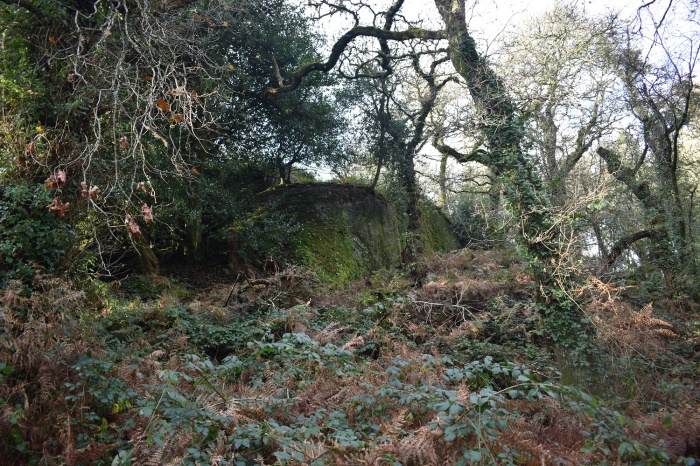 The truth is that opening on the above photo is on top of this tor. Long Cleave Tor and if you find your way down to the track below you will see the full extend of this huge walled tor

Following the track below Long Cleave Tor out of the trees to a small opening area, I followed the track opposite up a slight incline to a stile and the entrance into Shaptor Woods. Immediately after entering I went 90 degrees left and upwards for a couple of hundred metres to the outcrops here of West Shaptor. This one also has a vantage point

I walked back down the hill at this point (you could easily continue upwards to Shaptor Rock itself from West Shaptor). Back on the path I went straight across heading for Northcombe Copse Tor, this is the highest rock and looks to be all this tor is, but head right and down to find more.

The rocks tumble down hill here. Next is a return back the way you came to the path through Shaptor Woods

At this sign post. Head the way the path goes for Shaptor Rock. Left would be back out the way I came, but I’m heading right for two more tors.

I headed right along the path for a short distance, then struck out left and upwards to find Lower Shaptor, again this tor and the boulders get bigger as you climb

I stayed on the same contour as Lower Shaptor heading east to reach Sonny Copse Tor, as far as I was going east today. this outcrop is massive and by this point in the walk my head was spinning. Each outcrop/tor I reached on this walk had at least 4 or 5 big boulder outcrops, some had 10 or more. So they were starting to blend into each other, but this tor stood out as it just kept on going downhill. All the outcrops are the size of this one in the photo

Sonny Copse Tor. I next headed up to the top of this tor, and then beelined for Shaptor Rock across the top of Lower Shaptor 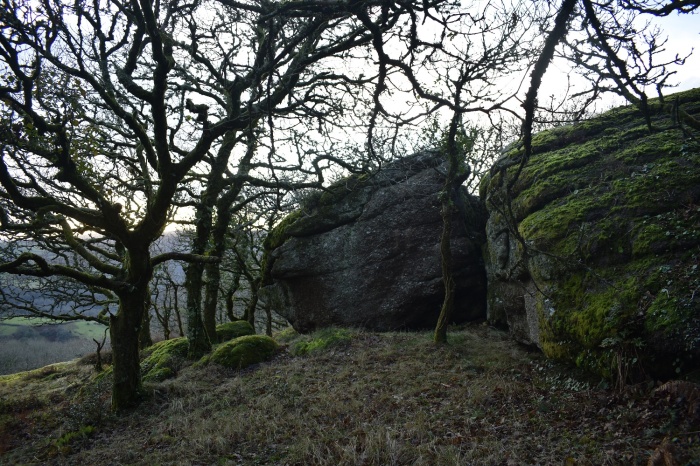 Here I am, and here is another massive tor within the woodland, there’s plenty of granite below this meagre outcrop, but its the summit you want on this one. 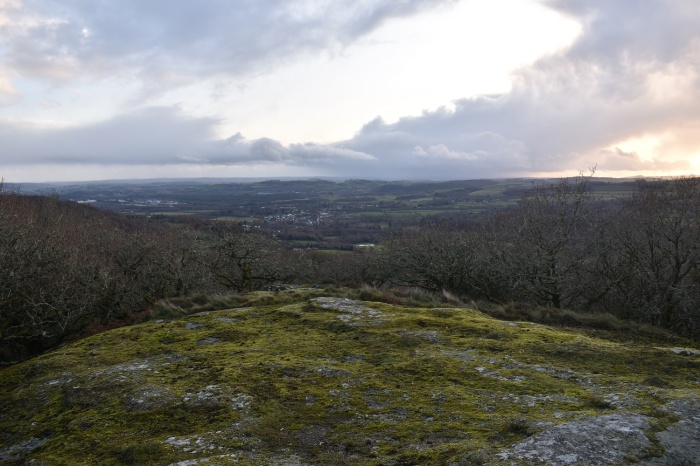 I took the path eastward out of the woods heading for the road. You hit this farm with the water feature, you shouldn’t use the driveway to get out on the road, instead use the path leaving beyond the pond but I was too tired by this point so quick marched along the driveway to the road before anyone saw 🙂 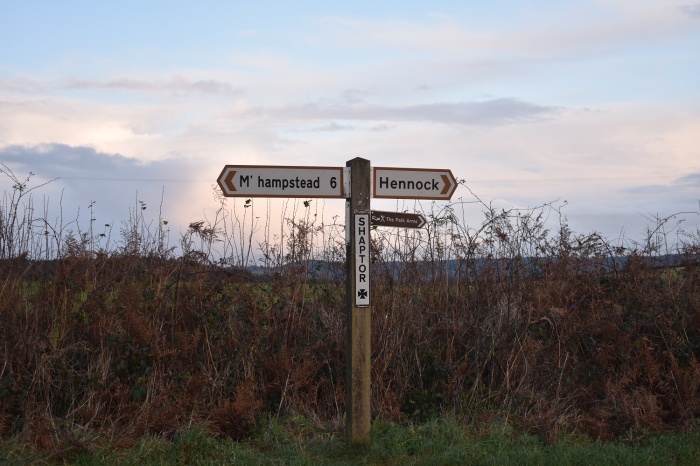 The driveway takes you here, its then a left for the reservoirs and Poolmill Cross 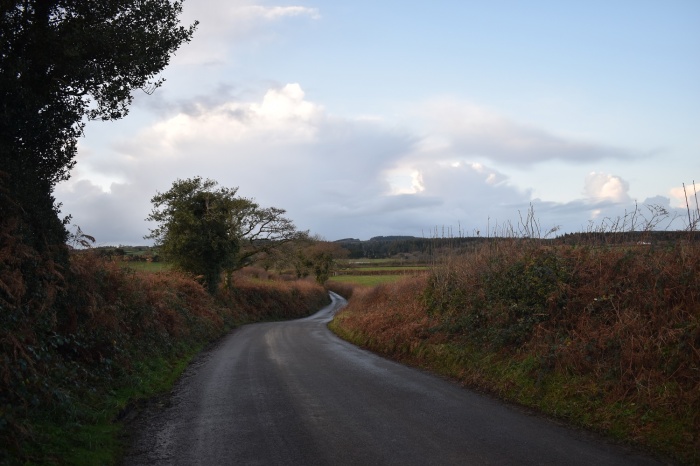 The light was fading now and the trees started to darken

Tottiford reservoir as I reached the car after a good walk.

I drove back past the reservoirs and stopped at my first coffee stop to make a phone call and saw this. Rude not to take a photo!